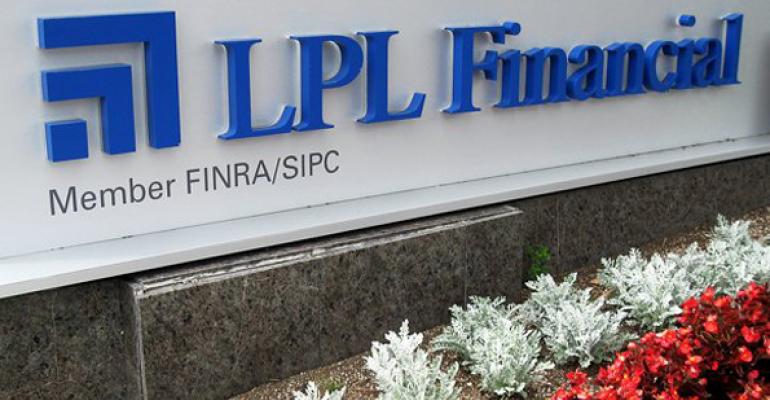 LPL Financial reported record first quarter adjusted earnings of $71 million, or 69 cents per share, on revenue of $1.1 billion, up 12 percent year-over-year. (Earnings missed analysts' estimates by 3 cents.) Much of the growth was attributed to a strong boost in its fee-based business, which drew a record $4.4 billion in net new advisory assets.

Five years ago, advisory assets made up 27 percent of the firm’s total assets, and today it represents 35 percent; Arnold expects that to grow to over 40 percent in the next three to four years. During the first quarter, advisory assets grew 21 percent year-over-year to $158 billion.

Fee-based assets have doubled from $6 million per advisor in early 2008 to $12 million per advisor today, Arnold said. Advisory represents over 50 percent of LPL’s new sales. The trend towards fee-based business contributes to advisory productivity, as advisors are able to manage more assets. It also expands the firm’s reoccurring revenue stream—currently at 67 percent, and enhances LPL’s margins, based on the strong return on assets in the advisory platform.

“These factors led to growth in asset levels, which rose 13.5 percent year over year to $447 billion and AUM per advisor climbing from $29.5 million to $33 million during that time period,” he said.

Annual production per advisor was down 0.8 percent sequentially and up 9.6 percent year-over-year to $252,000. That compares to advisor production of $254,000 last quarter.

“After a slow beginning to the quarter, advisor additions accelerated in March,” said Chairman and CEO Mark Casady. “Looking forward, we see this momentum continuing as our pipeline remains strong with a diverse array of independent producers, financial institutions, RIAs and retirement plan advisors.”