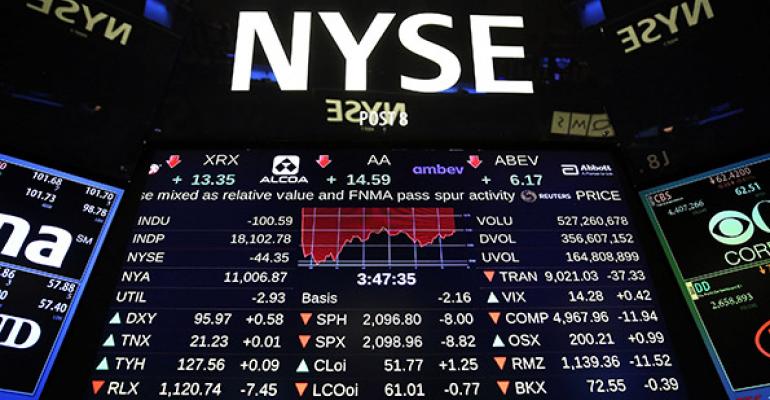 Even in a worst-case scenario, where big companies only hit their most pessimistic profit estimates, price-to-earnings ratios wouldn't be out of line.

(Bloomberg Prophets) --Equity investing is an optimist’s game. The only time stocks look cheap is when economies are dreadful, making corporate earnings power uncertain. At any other point in the investment cycle, valuations rarely seem affordable. You need a glass-half-full mindset to see the opportunities for earnings growth at those times.

The pessimist still has a role to play, however. Looking at the world with a clear eye is a critical skill to avoid the herd mentality that takes over as stocks rally. With U.S. stocks trading for 18 times earnings and -- before this week -- sleepwalking their way to new highs, we shouldn’t simply ignore the glass-half-empty crowd.

Traditional measures of equity valuation, based on consensus earnings, discount the most optimistic and most pessimistic estimates. Yet there is a lot of information at those extremes. If the most bullish analyst on a given company’s earnings proves correct, chances are excellent that that particular stock is heading higher. And if the pessimist has it right, look out below.

Do that best-/worst-case analysis on the largest names in the S&P 500, and you get a novel take on whether large-capitalization stocks are truly expensive. Or, as the data seem to show, still reasonably priced.

To assess the best-/worst-case scenarios, we pulled the highest and lowest expected future-year earnings for the 20 largest companies in the S&P 500. That abbreviated list holds all the major super-cap technology movers of the year, and also represents almost a third -- 31 percent -- of the index by market cap. These are the stocks that will lead the market higher or lower into the end of the year and into 2018.

Here’s what we found:

Conversely, if the bullish analysts prove correct, it may mean the world’s central banks will have to increase rates more quickly than anticipated. That 16 times best-case multiple allows for U.S. 10-year Treasuries to yield in the range of 3 percent to 4 percent and still hold to the old “Rule of 20,” which states that longer-term Treasury yields plus the forward P/E rates on the S&P 500 should equal 20.

All this goes a long way toward explaining why stocks look so bulletproof, grinding higher with little to no volatility. Even under worst-case scenarios, which include a decline in interest rates, large-cap equities are not terribly expensive. Not cheap, but not 25 times forward earnings, either.