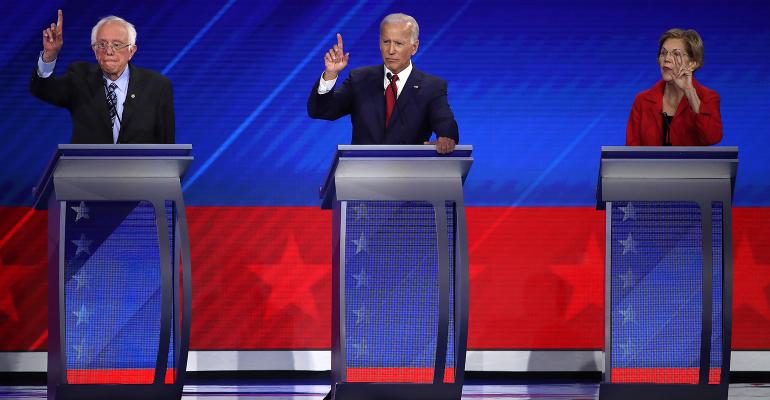 Investors Vote for Conservative Portfolios Ahead of November Elections

Investors turning to more conservative portfolios ahead of what's expected to be a volatile year, both in the markets and in politics.

Investors saving for retirement are confident in the economy. But they are concerned over frothy equity markets and expect the volatility to grow more extreme during the sure-to-be turbulent election year ahead.

That election-year concern has prompted many retirement-focused investors to reallocate their portfolios to more conservative investments, and has even prompted the sales of annuities, according to a recent survey of investors.

Artemis Strategy Group surveyed 1,004 investors about their retirement strategies in light of a highly politicized year. While the full study has yet to be released, the company revealed some highlights.

The survey, commissioned by insurance company Global Atlantic Financial Group, found that 21% of respondents said they have already purchased annuities ahead of the November 2020 elections.

Twelve percent of investors have already adjusted their retirement portfolios ahead of the elections. Besides buying annuities, Global Atlantic found 45% of respondents have moved into more conservative allocations or are planning to do so. On the flip side, 14% are aiming for more aggressive investments. Some investors (43%) have set aside cash for more investments.

Nearly all (97%) the respondents expect the market to become more volatile in response to the coming political slugfest; only 7% think it will remain relatively stable. One-third (33%) expect the volatility to be "substantial."

The top five political issues that investors felt would rock their retirement boat were the economy, health care, government dysfunction, and U.S. trade and tariff policies, followed by immigration.

But the heightened sensitivity stems from other issues too, according to the study. Respondents feared a potential recession (33%), deeming it as the biggest headwind against investment performance. The U.S. trade war with China was chosen by 21% of respondents. The other issues that investors cared about? The country’s economic growth (9%), the Fed’s interest rate changes (7%), impeachment proceedings (6%), instability in the Middle East (3%) and weak corporate earnings (3%).

If these investors were to seek out financial advice from an advisor, 50% want to know how to "maximize their portfolio’s performance," according to the survey, followed by questions over how the social issues would affect their retirement plans.

Global Atlantic’s Vote for Your Retirement study was conducted in October 2019. The survey included men and women between the ages of 40 and 74 who had a minimum of $75,000 in investable assets.