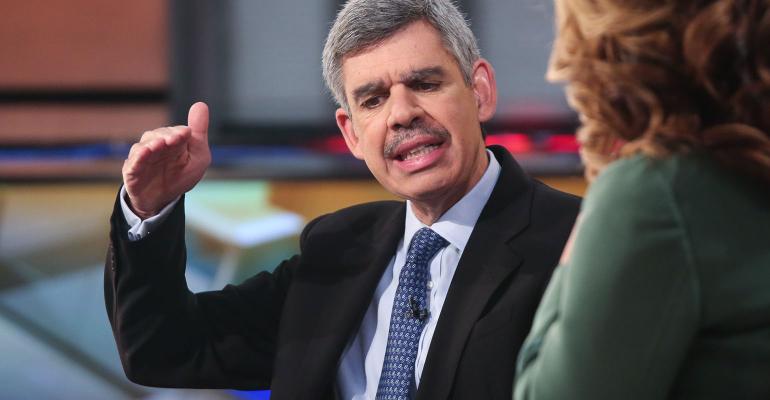 The decline in volatility is “encouraging people to take a lot more risk than they should, and understandably so,” El-Erian said.

(Bloomberg) --Mohamed El-Erian, Allianz SE’s chief economic adviser, said that investors lulled by rising stock prices have been adding risk that may come back to burn them.

For now, the assumption that markets will remain stable has been a self-fulfilling prophecy as investors use leverage to build their portfolios, El-Erian said Thursday in an interview on Bloomberg Television.

“The more you leverage your positions, the more the markets are calm,” said El-Erian, who is also a Bloomberg View columnist. “The problem with that is you get to a tipping point at some stage.”

Volatility in U.S. stock markets reached the lowest level since 1993 this week as investors focused on strong corporate earnings and signs of economic growth. And a European gauge of equity volatility fell this week to the lowest since March after French voters elected Emmanuel Macron as president over anti-euro nationalist Marine Le Pen.

The S&P 500 Index edged higher Wednesday, claiming a second closing record this week. Money managers including Paul Tudor Jones and David Einhorn have warned in recent weeks that stocks may be trading at unsustainable levels.

The decline in volatility is “encouraging people to take a lot more risk than they should, and understandably so,” El-Erian said. “The longer that tipping point is viewed to be further away, the longer this continues.”

Years of monetary easing by central banks globally encouraged risk taking by investors, he said. The question is whether elected officials can unify behind policies that will justify rising market valuations, he said.

“Clearly there’s been intent --- tax reform, deregulation, infrastructure,” he said, listing some of President Donald Trump’s goals in the U.S. “So there’s at least intent. Now the question is, ‘Can you get that through Congress?’ And it’s important to ask that question in this political environment.”