The S&P 500 started Tuesday 17% higher than a week ago, after gaining four days out of five and posting its best week since 2009.

(Bloomberg) -- Just a week ago, central bankers, politicians and Wall Street were all asking when the market turmoil would end. The question now is whether it already has.

The S&P 500 started Tuesday 17% higher than a week ago, after gaining four days out of five and posting the best week for the benchmark U.S. stock gauge since 2009. Thank a range of catalysts, from dip buying and short covering to unprecedented monetary support and the largest fiscal stimulus ever.

Now, no one can agree if it’s sustainable.

At the heart of the debate is a phenomenon known as a bear-market rally -- a period during a protracted downward trend in which equities stage a short-term revival.

If the doomsayers are right, that’s what stocks have been experiencing, and investors can expect more declines in the weeks ahead. It’s a persuasive argument, given the backdrop of the coronavirus, and the S&P 500 opened in the red on Tuesday morning.

But if they’re wrong and the stimulus saves the economy, those on the sidelines risk missing out on a supercharged rebound.

Read more: A Lot Riding on Stock Bottom Calls That Worked in a Bull Market

So just how common is a bear-market rally, and what happens afterward? It’s a question loaded with difficulties, because even defining bear and bull markets is an area of fierce debate.

Since the end of 1927, the index that ultimately became the S&P 500 has experienced 14 separate bear runs, according to Bloomberg calculations that define them as beginning any time the gauge closes more than 20% below a record peak. Assuming a bear market continues until the index either doubles from a post-peak low or climbs above its pre-bear high, the average duration was 641 days.

Within those periods, America’s benchmark equity index has rallied more than 15% on 20 separate occasions before retracements. These advances lasted about 78 days each. But even some of the retracements were littered with upswings, underscoring how hard it is to divine a trend when sentiment is febrile. 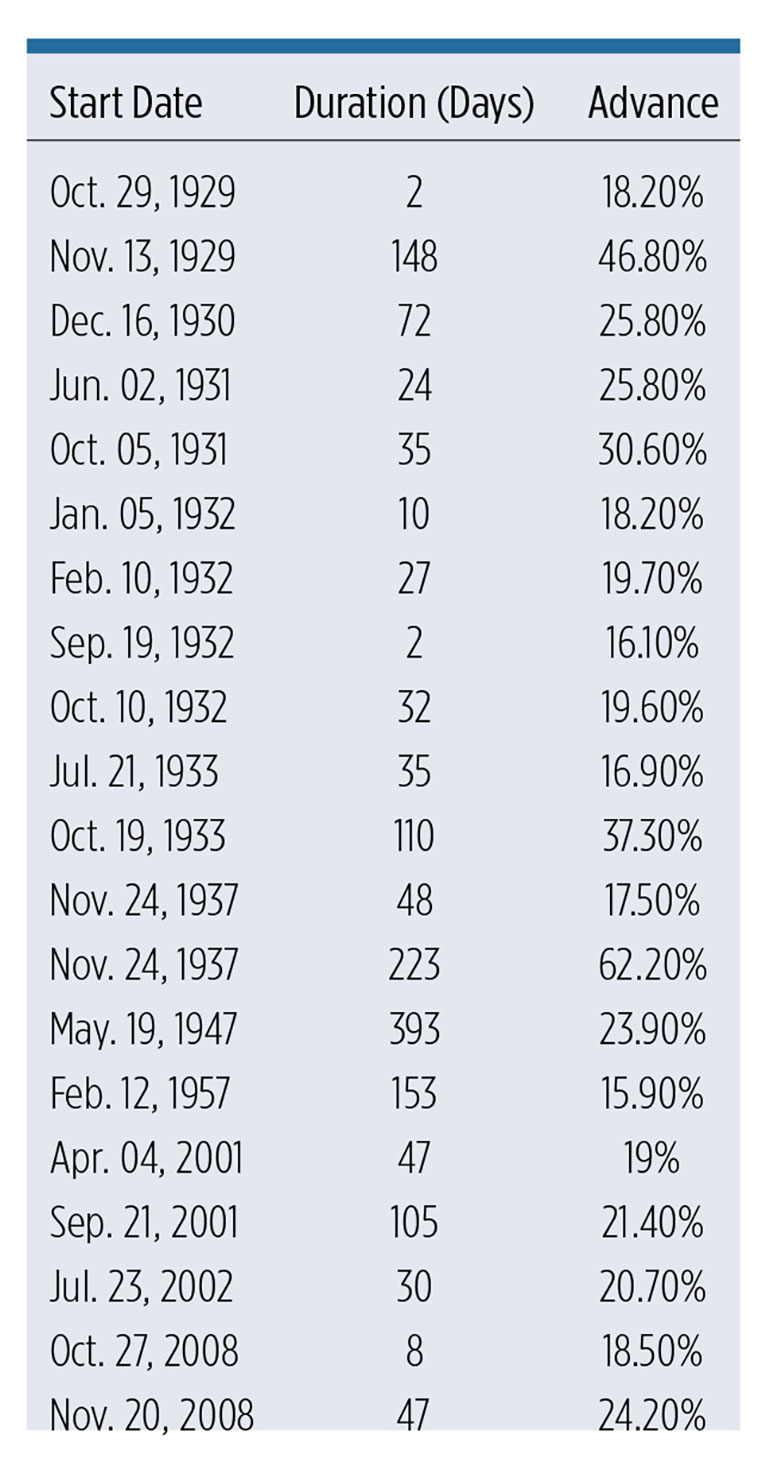 Catching one of those upswings was a profitable business. The typical gain was in the region of 25%. But to collect that, an investor had to reach into the jaws of a bear that on average doled out a 41% loss, and often much worse. In fact, declines were on average bigger in bear markets that contained a rally, at 47%. The slumps last longer too, at almost 831 days.

The big question, of course, is what happened next. If this is a bear rally, how long will it be before the bottom of the bear? Based on the above data set, if a bear market contained a rally, it took an average 627 days from the start of that rally until the index bottomed. And there’s a huge dispersion within that -- the longest time was 1,616 days and the shortest was 133 days.

Reading across into the current rebound could be a fool’s errand, of course. The velocity of the recent sell-off has no precedent given the unique collapse in demand and investment. Put simply, there has never been a pandemic like this in modern times, and the monetary and fiscal response has no parallel.

Meanwhile, the S&P 500 continues to flash confusing signals. Despite gaining four days out of five through Monday, the gauge on started this week by posting a technical signal known as a death cross, which suggests further losses could be ahead.

It’s also worth noting that bear-market rallies are making a comeback. They were common during the great depression and war years, but then none occurred between 1960 and 2000. The next two recessions yielded five between them.

To sum up, figuring out if the past will prove prologue in this coronavirus crisis is hard, and more losses could be ahead.

To contact the editors responsible for this story:
Sam Potter at spotter33@bloomberg.net
Sid Verma