U.S. GDP will grow over 2%, while global GDP grows over 3%, Doll says. He subscribes to Evercore ISI’s Ed Hyman's thinking that, “This business cycle is both ‘chronically old but economically middle-aged.’”

It’s old in that we’re in the longest expansion ever, but economically, the cycle is only middle-aged. The operating rate for the economy, for instance, is at 78%. We’ve never entered a recession unless it’s been above 80%. Housing almost always begins to fall before a recession, and housing starts are currently going up on the backbone of lowered interest rates in many places.

Doll expects the Federal Reserve to stay on hold through the election. Right now, these figures are at 1.5-2%, but both numbers will creep higher during the course of the year and end the year between 2-2.5%. He cites the effects of the stimulus around the world, higher wage pressure, rising inflationary expectations, and the easing of the trade war as reasons.

Doll says this will be due in part to rising wage rates. The most significant reason given for cost pressures by corporate America in recent earnings releases was labor costs—wage rates and the benefits that go with that.

If they do return less than 5%, it’ll be the fourth time that’s happened in the last 25 years. For all three asset classes, none are cheap, Doll said.

Doll made this prediction last year and got it wrong, but he’s coming back with it again. His argument? We’ve had a long period where the U.S. outperformed, and many years by a significant magnitude on the heels of U.S. economic growth, earnings growth, and fiscal and monetary policy. The trade deal has been more positive for things outside the U.S. than inside, and valuation levels are more favorable outside than inside, he said.

Growth has outperformed value by a wide margin for a number of years, and has even set records. But around Labor Day of last year, we saw a shift, where value and cyclical stocks started to outperform. Doll believe there’s more of that to come.

Further, when the economy and earnings accelerate, that’s a better environment for value and cyclicals. And while he has predicted that earnings will not meet expectations, they’ll still be up more in 2020 than they were in 2019.

Financial stocks remain cheap despite their improvement in price last year. And the balance sheets of banks are in the best shape they’ve been in a while. Lending is largely taking place outside the banking system, which keeps those balance sheets reasonably healthy, Doll said.

He expects some value-like technology stocks to do well. Their earnings growth was faster than their stock price performance, so valuations are not extended.

While health care underperformed last year, despite a rally in the fourth quarter, Doll believes the cheapness of it, the fact that the population is aging and using more health care, and balance sheets and income statements of these companies will lead to a year of outperformance.

This is, perhaps, Doll’s most controversial prediction. Active versus passive management is a cyclical trend, rather than secular, and we’ve been in a long cycle where active managers, on average, have underperformed their indices.

But we’re due for a shift, and Doll cites a number of factors that he expects to be tailwinds for active managers in 2020. Active tends to beat passive when: non-U.S. markets outperform the U.S.; there are lower overall equity returns; value beats growth; when there are low correlations; economic growth improves; and interest rates rise. When small-cap beats large-cap, that also tends to be a tailwind for active, but Doll’s not sure this will happen this year.

9. Cold War Within U.S. and Between U.S. and China Continue
Getty Images

The trade deal with China was not the end of the controversy with China, and the country is so big that it does matter.

Further, the U.S. is more divisive and troubled than past years. He cites the disagreement among generations about the attractiveness of capitalism versus socialism, the income and wealth disparity and the fact that life expectancy has fallen for three straight years.

Doll predicts the re-election of President Trump, a Democratic House and Republican Senate. When an incumbent president runs for re-election and there’s no recession and little challenge from within his own party, that almost always results in an incumbent re-election. Doll doesn’t expect this time will be any different. 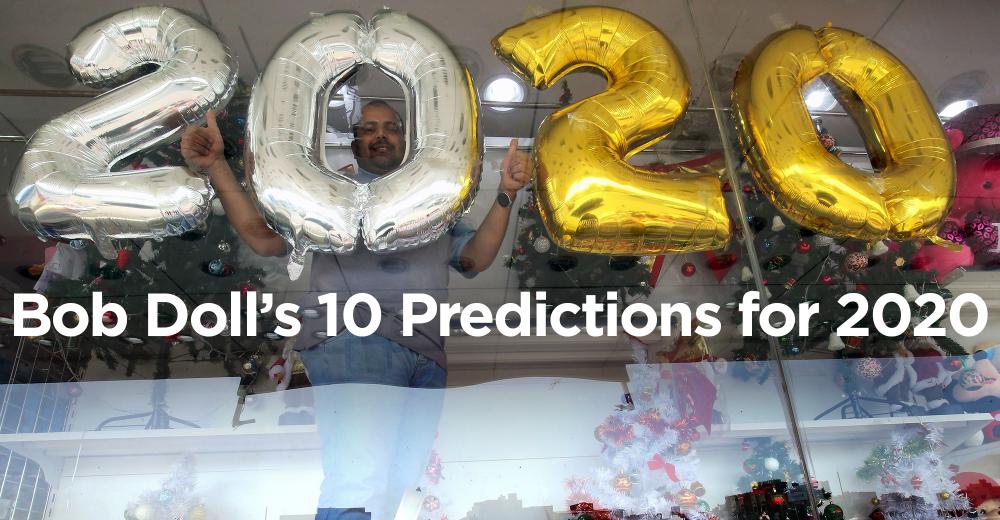 Next Up
How Well Do You Remember 2019?
Start Slideshow ›