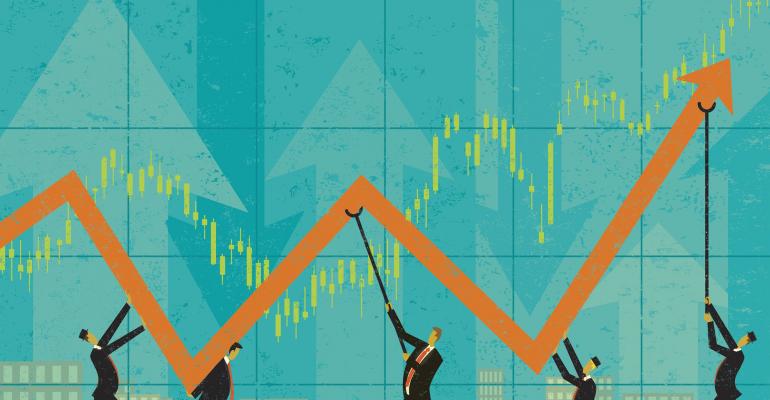 Returns fall when a fund grows, though a few giants have figured out how to avoid this trap.

(Bloomberg View) --Does market-beating performance disappear as an asset manager gets big? This is a crucial question for investors and for the finance industry.

Most introductory finance classes, or personal finance tutorials, start with an explanation of compound interest. They show how even a modest sum, growing over time at a constant rate, will balloon to incredible size. This definitely works for stocks -- or at least it has so far. If you put your money in the U.S. stock market any time in the past century and then just waited a few decades, you reaped big gains.

But this simple math can yield some truly eye-popping projections when you combine it with the notion of market-beating returns, or alpha. Suppose that instead of the 8 percent to 10 percent average return of the stock market, you could get the 30 percent return reportedly achieved by Two Sigma Investments’ Compass Enhanced fund -- one of the hedge fund industry’s top performers -- from 2005-2014. You would more than double your money every three years! If you got that kind of return for three decades, you’d have more than 2,500 times the amount you started with. That’s almost unimaginable wealth, even for an average earner.

But there’s a catch here. If alpha drops as assets increase, the returns don’t compound at those dizzying rates. Suppose that a hedge fund can get 30 percent every year, but only on assets of $1 billion. If it tries to scale up to $10 billion, the alpha will go way down. So it keeps its assets at the $1 billion level by distributing its $300 million in profits to its investors every year. Those investors then invest the $300 million in the broader stock market, or in the average hedge fund (which does slightly worse than the broader stock market).

In this hypothetical example, the investors aren’t earning compound interest of 30 percent -- they’re earning much less. To see how this works, let’s do a little simulation. Suppose I start out with $1 million, and invest it in a hedge fund called Magic Alpha. Magic Alpha won’t let me invest more than $1 million, but it earns 30 percent every year after fees, and hands me a $300,000 check every January. All of my money that isn’t in Magic Alpha is in the stock market, which earns a reliable 8 percent a year. Here’s what my money looks like: Being able to put $1 million of my wealth in Magic Alpha certainly boosts my returns a lot -- after three decades, I’m about 35 times as rich as I started, as opposed to only 10 times richer if I had invested everything in the stock market. But 35 is a far cry from 2,500. Because Magic Alpha won’t take more than $1 million of my money, it raises my annualized return to about 12.5 percent, rather than 30 percent.

So if alpha doesn’t stick around as funds scale up, yearly percentage returns for market-beating managers don’t equal compound interest. That’s why it’s very important to ask whether returns revert to the mean as the size of a fund increases.

There are good theoretical reasons to believe this happens. The more money a trade involves, the greater the price impact on the asset being purchased. Price impact reduces trading profits, since it pushes mispriced assets toward their fair values. Presumably, there are a limited amount of assets in the world that are severely mispriced. So as a manager is forced to move around bigger and bigger amounts of money, she will find it harder and harder to discover lucrative trades.

Economists have long been curious about just how fast alpha decays with size. Hedge funds are hard to study because they rarely provide data, so researchers usually concentrate on the more transparent mutual-fund industry. In 2004, Joseph Chen, Harrison Hong, Ming Huang and Jeffrey Kubik found that bigger mutual funds tend to get lower returns. A number of other teams found the same. Recently, however, economists Lubos Pastor, Robert Stambaugh and Lucian Taylor called this result into question. They concluded that while a larger active mutual fund industry causes active management to be less profitable overall, relative performance within the industry doesn’t fall with size. In other words, Pastor et al. predict that a really good active fund actually can compound your money year after year.

But a new paper by Duke University’s Campbell Harvey and Texas A&M’s Yan Liu restores the conventional wisdom. They carefully correct for the biases that Pastor et al. had found in the previous empirical literature. Once they do this, they found that the returns to active investing fall both with the size of an individual fund and the size of the industry as a whole.

This is a timely research project, because some hedge funds are getting really big. Bridgewater Associates LP tops the list, with more than $200 billion under management by one definition. Other supergiants include Millennium Management LLC and Citadel LLC. These are hedge-fund companies, not individual funds, but the numbers are still enormous compared with past years or decades.

Have some of these supergiant hedge funds found a way to beat the law of diminishing returns? The correlation found by Harvey and Liu is just a statistical trend, not an iron rule of nature. It’s possible that Bridgewater and a handful of others have discovered durably profitable ways to make money trading macroeconomic assets like sovereign bonds, for which price impacts will be small even when hundreds of billions of dollars change hands.

But even if Bridgewater and a couple others have managed to avoid diminishing returns, most managers probably don’t. That means that even if you pick the right hedge fund to give your money to, chances are that its returns won’t compound. Some people get rich with active management, but most don’t get that rich.