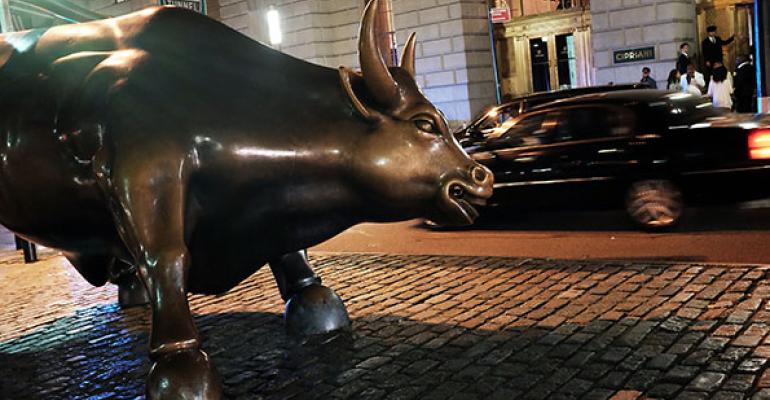 Yet another survey shows bullish sentiment is high for 2017. The newly released E*TRADE quarterly Streetwise report indicates 65 percent of investors are bullish, up 20 percent from the start of the year, while 60 percent of investors believe the market will rise this quarter. Sentiment is so positive that 60 percent of respondents say the economy is ready for another Fed hike this quarter. Some potential investment opportunities, according to survey respondents, include energy, financials and health care. But be careful. New year forecasts are typically bullish and are often times wrong, according to a Jeff Sommer’s article for The New York Times, which was published before much of the 2017 buzz. TD Ameritrade lauched a series of 30-second ads during the NFL playoffs over the weekend. The ads, developed by Havas New York, center around "the Green Room," a safe haven for people to drop by for real, honest conversations about money. The ads include a fictional "Green Room Guy" who listens to fictional investors without judgement and discusses finances and investing goals in everyday language. The ads promote TD's Essential Portfolios robo advisor, as well as ways investors can save money and invest it for their retirement.

What About the Grandkids? There's one potential "cost" your clients may not be considering in their retirement planning: grandchildren. According to a new survey, grandparents say they spend an average of $2,383 each year on their grandkids. The money goes toward gifts, college savings, extra-curricular lessons, school supplies and allowance. But besides monetary support, millennial parents say their parents are providing an approximate $300 worth of unpaid labor support each week. If you do the math, that's an opportunity cost of almost $15,600 per year.