Elected to four terms, Franklin Roosevelt had more opportunity to exert influence than any other president. His achievements are unparalleled. FDR almost single-handedly shifted the nation’s economic center of gravity from Wall Street, where it had been for over a century, to Washington, DC.  Perhaps the most significant of FDR’s financial innovations was his strategy of deficit-spending and pump-priming to get the nation out of the Great Depression. Every subsequent president has used this strategy, including the current administration in its attempt to stimulate the economy for the COVID-19 crisis. Other achievements:

► The Federal National Mortgage Association (“Fannie Mae”) that, along with the Federal Housing Administration (FHA) made it possible for millions of Americans to buy homes; and

► The Glass-Steagall Act (part of the 1933 Banking Act), which prevented commercial banks from engaging in investment banking. (Most of its provisions were repealed in 1999, contributing to the Great Recession of 2008-2009.)

Wilson supervised the passage of progressive legislative policies (The New Deal) unprecedented in U.S history. He also led the U.S. into World War I and championed The League of Nations. Among his innovations:

► The Revenue Act of 1913, also known as the Underwood-Simmons Act, which not only lowered tariffs rates from 40 to 26 percent, but, more critically, established a federal income tax on income over $3,000 per year; and

► The Federal Trade Commission Act of 1914, which created the FTC to regulate trademarks and brands.

Taking office at age 42, Teddy Roosevelt remains the youngest person to become president. He emerged as a trustbuster and leader of the progressive movement. Roosevelt is the first president to succeed in marshalling the federal government to regulate big business to protect the welfare of society. His “Square Deal” promoted consumer protection, breaking of trusts, regulation of railroads, and pure food and drugs. His accomplishments:

► The Elkins Act, which ended the practice of railroad companies granting shipping rebates to preferred customers;

► Breakup of the Northern Securities Company, a large railroad trust, for violating the Sherman Antitrust Act;

► The Department of Commerce and Labor (later separated into two cabinet departments); and

Barack Obama earns points for navigating the country through the bubble in the housing industry and the resulting Great Recession of 2008-2009, which threatened a complete collapse of the entire economy. He mitigated some of the risk of future meltdowns and created a template for managing future financial crises. Obama’s achievements include:

► The Dodd–Frank Wall Street Reform and Consumer Protection Act overhauled financial regulation in the aftermath of the financial meltdown for almost every part of the nation's financial services industry;

► Directing $60 billion in TARP funds to General Motors and Chrysler, saving the automobile industry; and

► The Sherman Antitrust Act of 1890, the first federal law to regulate giant corporations. Despite its flaws, the legislation enabled future presidents. such as Theodore Roosevelt, Woodrow Wilson and Franklin Delano Roosevelt to curb the ability of giant corporations to set prices and restrain competition;

► First president to preside over a federal budget of more than $1 billion.

Calvin Coolidge presided over the boom years of the Roaring Twenties.

In Coolidge’s five-and-a-half years in office, the Dow soared an incredible 266%, translating to compound annualized gains of 26.1% per year. His fiscal policy encouraged a speculation-driven over-heated economy and margin trading, policies which contributed to the Great Depression. His achievements include:

► The Revenue Acts of 1924 and 1926, which sharply reduced income taxes, especially gift, excise, and inheritance taxes; and

Ronald Reagan campaigned on cutting taxes and the federal budget, yet increasing defense spending. It was a recipe for deficit spending and inflation, which is what the nation received. Reagan gets points for supporting the tough anti-inflation policies of Federal Reserve Board Chairman Paul Volcker, a Carter appointee. These policies were politically painful, resulting in higher interest rates, yet Reagan accepted the necessity, even though it spurred a recession. Republican leaders urged Reagan to break with the Federal Reserve, but he refused to do so.

► Tax cuts and then tax increases;

Dwight D. Eisenhower, the supreme commander of Allied forces in World War II, worked hard to balance the budget. Three of his eight budgets were in the black, the last president who can claim a similar achievement. Eisenhower:

► Embarked on the Interstate Highway System, a 41,000-mile road system, one of the most ambitious infrastructure projects in American history;

► Increased the minimum wage; and

► Created the Department of Health, Education and Welfare.

President Bush presided over the collapse of the Berlin Wall and the Soviet Union. The triumph of capitalism seemed complete. He dealt decisively to rescue and regulate the scandal-plagued savings and loan industry. His financial accomplishments included:

► Creating the Resolution Trust Company to oversee the merger or liquidation of troubled banks.

Bill Clinton presided over the “dot-com” boom, ushering in the technology-driven world we have today. The emergence of the internet and a new breed of technology companies created a surge in prosperity and fundamentally reshaped the economy. The S&P 500 soared 210% during Clinton’s eight years, working out to annualized returns of 15.2%. He loses points for signing the Financial Services Modernization Act that repealed Glass-Steagall. The repeal of Glass-Steagall consolidated investment and retail banks and promoted high-risk speculation, which contributed to the 2008-2009 Great Recession.

Historians judge Herbert Hoover to be one of worst presidents the U.S. ever had. Hoover took office just months before the 1929 crash that ushered in the Great Depression and a decade of the worst bear markets in U.S. history. That was bad luck. But Hoover made conditions worse by signing into law the Smoot-Hawley Tariff Act. Over a thousand economists warned him it would exacerbate things. It did, turning what might have been a modest recession into the worst depression in U.S. history. His stewardship of the Depression was hapless. President Hoover remains the worst president for financial innovation and the market performance during his administration reflects it: a 30.8% annualized compound loss. 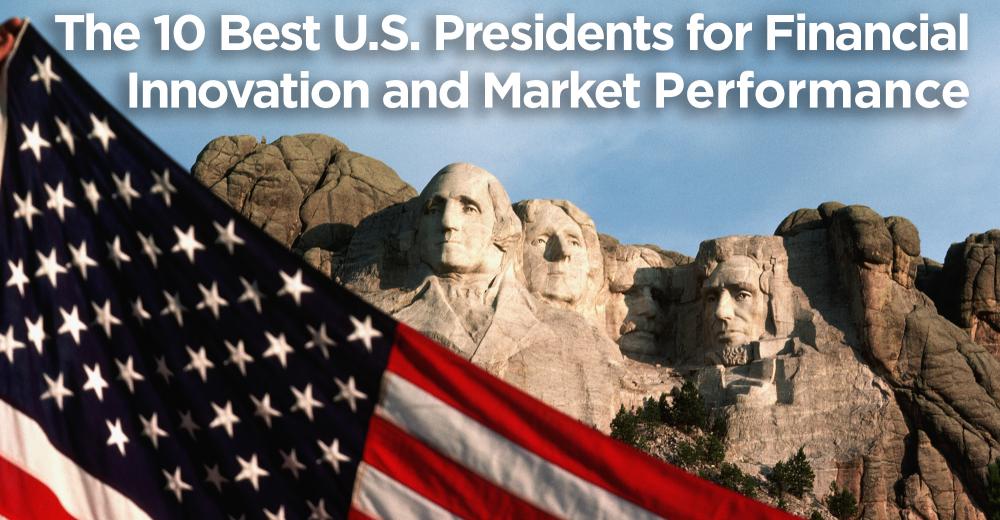