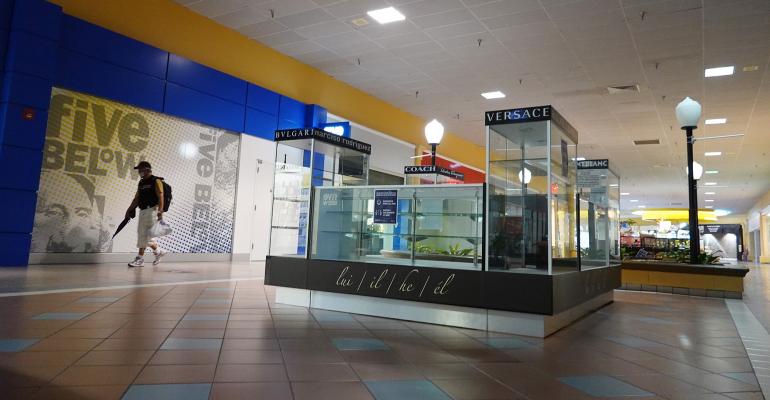 Billionaire N.Y. ‘Bottom Feeder’ Buys Malls as Others Run Away

One investor has been buying up struggling retail centers at bargain basement prices, building an empire of 268 properties.

(Bloomberg)—Igal Namdar has made a fortune buying shopping malls no one else wants.

He scoops up struggling centers at bargain-basement prices after their landlords lose faith, betting he can turn a profit before the last tenants turn out the lights. So far, that strategy has netted big gains -- as well as lawsuits accusing Namdar of allowing his real estate to slide into disrepair.

In building an empire of 268 properties in 35 U.S. states -- most prominently aging malls in small cities -- Namdar has accumulated a personal net worth of about $2 billion, according to the Bloomberg Billionaires Index.

The pandemic accelerated Americans’ years-long shift to e-commerce, forcing many already-ailing department stores and apparel shops to go dark. Landlords that own lower-end malls -- with high proportions of tenants that have fallen behind on rents or shuttered stores -- have been hit especially hard.

For Namdar, that smells like opportunity. He expects a flurry of deals in 2022 as more owners of troubled retail properties head for the exits.

“Any seller of retail -- malls or open air -- any size of portfolio, we’re there,” Namdar, 51, said in an interview from his headquarters in Great Neck, New York. “We can close immediately, as is, where it is, with no due diligence.”

The formula for Namdar Realty Group and partner firm Mason Asset Management is to recruit down-market retailers to fill vacancies while holding down costs by limiting debt and capital-improvement spending.

“They’ve been a bottom feeder, historically, buying on the cheap, for pennies on the dollar and making a go of it,” said Jim Costello, senior vice president at Real Capital Analytics Inc. “It’s not the high end of the market, but it’s solid retail if you can set it up right.”

Real Capital tracks 134 of the Namdar Realty Group’s properties and estimates that portfolio is worth about $2.7 billion.

Namdar declined to comment on the value of the properties his company owns, or his personal wealth, but said the figures Bloomberg is reporting are inaccurate.

U.S. mall values have plunged 46% from their 2017 peak, including an 18% drop since the Covid-19 pandemic started, according to real estate information service Green Street. Declines have been fastest among B and C-rated malls like Namdar’s, where sales per square foot average a few hundred dollars.

Namdar’s bet is that he can pay a small enough price to outrun the decline. He said he sees value in the properties as malls, where other investors in the market are more interested in redeveloping them for other uses.

“It’s all about the cost basis,” said Cedrik Lachance, director of research at Green Street. “If you’re buying to harvest cash and not reinvest, it will work.”

Some of the biggest landlords, including Simon Property Group Inc. and Brookfield Asset Management Inc., have walked away from centers where values slumped below the property’s debt. Other companies -- Washington Prime Group Inc., CBL & Associates Properties Inc. and Pennsylvania Real Estate Investment Trust -- filed for bankruptcy, raising the potential for massive portfolios to come up for sale.

Namdar and Mason have averaged 20 acquisitions annually over the past decade, but could swallow 100 at a time if the right deal came along, Namdar said, declining to provide details on how much money they plan to spend.

Namdar and Nassim make no pretense of catering to luxury consumers. They say they charge affordable rents so stores such as Claire’s, Lids and Piercing Pagoda can fill vacancies.

“Is it where my wife would shop?” Nassim said about their properties. “It’s a different market.”

Their first purchase, in 2012, was the DeSoto Square Mall in Bradenton, Florida, after Simon defaulted on the debt. They sold it in 2016 for $25.5 million to ML Estate Holdings LLC, which sued two years later, contending the property had lower revenue and higher costs than represented.

“Namdar’s approach to its real estate business generally is to purchase marginally performing properties, drain them of cash and operating funds, and then sell them,” the lawsuit in New York Supreme Court in Brooklyn alleged.

Namdar has also been sued by retailers, including International Decor Outlet, which in 2017 accused the landlord of contract breaches such as malfunctioning air conditioning, substandard repairs and inadequate security at the Regency Square Mall in Jacksonville, Florida.

“Landlord is an absentee landlord with a reputation as a ‘slumlord,’” the complaint in Duval County Circuit court alleged.

At the same property, Impact Church of Jacksonville accused managers of avoiding upkeep, making the “building look abandoned.” Impact paid $7.4 million in 2016 to buy a former Belk department store on the site, where it now runs a school as well as a church. The price was more than half the $13 million Namdar paid for the entire mall, which names 46 other tenants on its website.

Namdar declined to discuss individual cases but said such complaints are rare.

“There were factors that led to this, such as not having the rent to pay,” he said. “Properties that are marked for redevelopment are few and far between, so we maintain our assets.”

Among recent mall deals was the $10.3 million purchase in April of Marketplace at Brown Deer outside Milwaukee, valued at $45 million in 2005, according to loan documents and an announcement by the seller, Retail Value.

“We’d like to improve our quality but we’re not going to pay a crazy premium for an A-mall,” Namdar said. “Our goal is to stick to those B and B-plus assets. Those A’s get to be too crazy. The Ferraris of the world -- that’s not the kind of car we’re looking for.”

--With assistance from Oshrat Carmiel and Tom Maloney.