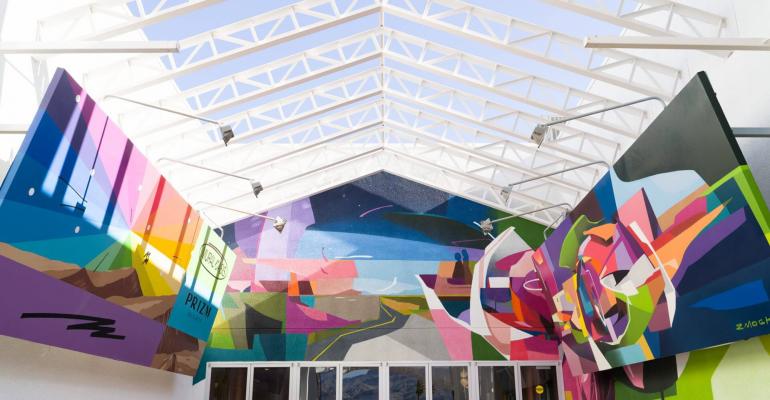 The loss is the largest loss in both dollar amount and percent of original loan balance for a CMBS loan since the 2008 crisis.

(Bloomberg)—A loan tied to a beleaguered mall outside of Las Vegas realized a loss of 120% after the shopping center sold for about the same price as a condo.

The loan, which had a current balance of $62.2 million, was completely written down after the Prizm Outlets were liquidated for just over $400,000, according to Bank of America Corp. When accounting for $11.5 million in fees and reimbursements owed to the master servicer for advances made, the total realized loss came out to $74 million.

That’s the largest loss -- both in terms of dollar amount and as a percent of the original loan balance -- for a commercial mortgage backed conduit loan since the 2008 financial crisis, Bank of America analysts Alan Todd, Mao Ding and Graham Voss wrote in a May 21 report.

It’s vindication for traders who bet against retail using the so-called CMBX 6, a commercial real estate credit derivatives index with heavy exposure to shopping centers and malls. This is the first payout to those who shorted the index, including billionaire investor Carl Icahn.

“We believe these mortgages will have the same disastrous fate as mortgage-backed securities had in the 2008 debacle,” Icahn said in an interview this week with Bloomberg’s Scott Deveau.

Betting on retail’s demise was a popular short that soured in recent years as malls were able to survive. But fortunes reversed amid the pandemic’s lockdown orders last year. People stayed home and shopped online, exacerbating an existing threat to brick-and-mortar stores. Even after many states allowed retailers to open up again, shopper traffic remained low.

So-called liquidation proceeds on the Primm, Nevada mall, formerly known as the Fashion Outlets of Las Vegas, were about $402,000, roughly the cost of a luxury two-bedroom condominium near the strip. That’s even less than the $1.525 million auction price initially settled on in January.

“May 2021 servicer data that was released indicates the asset resolved with a larger loss than expected,” commercial real estate data company Trepp said in a May 18 report. Neither Bank of America nor Trepp listed who the buyer was, but Great Neck, New York based Kohan Retail Investment Group now lists it as one of its owned properties on the company’s website.

The Prizm Outlets had been valued as high as $28.2 million less than a year ago, and $125 million in 2012 when the loans were bundled into a commercial mortgage-backed security. The two lowest-ranking tranches of the CMBS deal’s capital structure were completely written off this month as a result of the liquidation, Bank of America said. The tranche above that, originally rated in the BB range, was partially written down.

The AAA rated parts of the CMBS transaction had kept their grades until February, when Moody’s Investors Service downgraded one of the three tranches by two levels. At the time, Moody’s said it expected a loss in excess of 100% of the current loan balance.