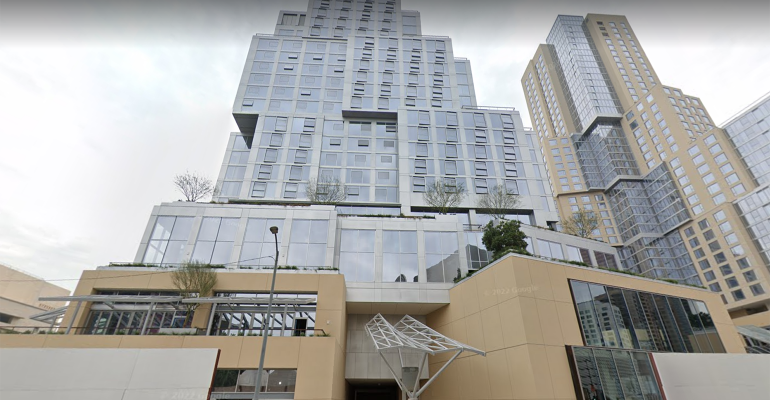 The Grand LA will include a 28-floor Conrad hotel and a 45-story apartment tower that will open this summer. The retail section will debut in 2023.

(Bloomberg)—It’s taken 15 years — longer than the time to finish Manhattan’s Hudson Yards — for Related Cos. to complete the Grand LA, a $1 billion hotel, residential and retail complex designed by star architect Frank Gehry.

The Los Angeles hilltop development’s 28-floor Conrad hotel opens July 6, and the first tenants move into a neighboring 45-story apartment tower on July 15. The retail section — a mall-like space between the two towers for restaurants and boutiques — debuts in 2023.

Grand LA rises across Grand Avenue from Gehry’s aluminum-clad Walt Disney Concert Hall, home of the Los Angeles Philharmonic. Nearby palaces of culture include the Dorothy Chandler Pavilion, the Ahmanson Theatre, the Broad art museum, Los Angeles Museum of Contemporary Art and the Colburn School, a music and dance academy.

“This the biggest concentration of performing and visual arts venues anywhere in the US,” Related Executive Vice President Rick Vogel, who oversaw the Grand LA construction, said during a project tour this week.

The 305 rooms at the Conrad, a Hilton brand, start at about $510 a night. Celebrity chef Jose Andres created menus for the hotel’s restaurants and bars, airy eateries that spill onto outdoor terraces with views sweeping from Disney Hall to City Hall.

Related executives disputed suggestions the project reinforces the neighborhood’s image as an enclave for the elite. The 436 apartments — all rentals — include luxury penthouses on the top 15 floors. On lower floors, 89 units are reserved for low- and moderate-income tenants, sought-after housing  in a city where soaring shelter costs have become a top political issue.

“It’s a space to receive the community and be part of the concert hall,” said Phoebe Yee, a Related executive vice president. Yee coordinated the project’s design team, which includes Tara Bernerd, David Rockwell and Tony Ingrao in addition to Gehry.

Related received the rights to develop the site, a former parking lot, in 2007 in exchange for contributing $57 million for the nearby Grand Park, a public green space that slopes down four blocks to City Hall, and donating land for the Broad museum.

“Welcoming our first guests and residents to the Grand LA is a tremendous milestone for the entire Grand Avenue redevelopment project and a testament to the power of great public-private partnerships to transform cities," Related Chairman Stephen Ross said in a statement.

The 2008 financial crisis put the project on hold, delaying development for 10 years, during which time Related rounded up a new partner, the US affiliate of China Harbour Engineering Co. Construction started in 2019, a year before the world faced Covid-19 lockdowns.

“The timing is perfect,” Vogel said of the opening. “People are thirsting for experiences outside their home.”

To contact the author of this story: John Gittelsohn in Los Angeles at johngitt@bloomberg.net