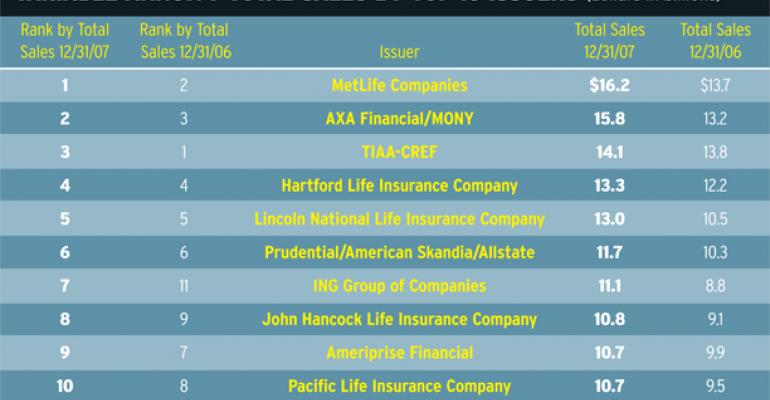 Variable annuities are in the midst of a major overhaul. In recent months, VA providers have been busy raising fees, decreasing benefits and, in some cases, suspending guaranteed income and withdrawal riders all together. As asset values in VA portfolios plummet along side of the market, and interest rates sink, many insurance companies are struggling to fund guaranteed payments on the products. More fee hikes and benefits cuts are expected in May, when new product prospectuses collectively hit the shelves.

Variable annuities are in the midst of a major overhaul. In recent months, VA providers have been busy raising fees, decreasing benefits and, in some cases, suspending guaranteed income and withdrawal riders all together. As asset values in VA portfolios plummet along side of the market, and interest rates sink, many insurance companies are struggling to fund guaranteed payments on the products. More fee hikes and benefits cuts are expected in May, when new product prospectuses collectively hit the shelves.

It’s a big disappointment for advisors who sell a lot of variable annuities—and it means a lot more work. Frank Dragotta, managing principal of a LPL independent b/d branch office in Lyndhurst, NJ, says variable annuities (VAs) really caught his eye when insurance companies started offering guaranteed withdrawal benefits in 2001 and 2002. Dragotta, for whom VAs account for 40 percent of his $40 million book of business, says over the next ten years benefits quickly became more robust as insurance companies competed to create the most attractive offering.

But at the end of March, Dragotta began to notice insurance companies decreasing benefits and increasing fees, and in some cases discontinuing products all together. In response, Dragotta spent the last two weeks of March documenting these product changes, contacting wholesalers and doing due diligence on the financial health of the insurance companies—in many cases going back to meet with product providers in person. In all, Dragotta says he is spending 30 percent more time now doing due diligence on insurance providers than he used to.

“Of the companies I was doing business with six months ago, some I will continue to do business with, but I am also adding new carriers who are in a better [financial] position, but weren’t as big on the shelf,” Dragotta says.

Like Dragotta, many advisors who use VAs are trying to digest the massive changes in product design, while also spending added time assessing the financial stability of insurance companies. And in many cases, like Dragotta, advisors have decided to switch providers.

“Within two months this product has changed like night and day,” says Joe Spada, managing director of financial planning firm Summit Financial Resources, Inc., in Parsippany, New Jersey. Indeed, it seems the living benefit arms race is officially over, as insurance companies say they are withdrawing benefits to better align their products with the current economic environment.

VA Throwbacks
According to a recent Cerulli Associates insurance survey, insurers are using a number of strategies to manage the risks associated with paying guarantees on variable annuities. On a five-point scale where five indicates “most often used,” formal hedging programs came first, receiving a score of 4.4. Next in line was increased charges for benefits, with a ranking of 3.5, and reduced withdrawal rates on living benefits, at 3.1. Lisa Plotnick, associate director of Cerulli Associates, says many insurers are paring back living benefits of 7 percent to around 5.5 percent or 6 percent. (Fees on such riders range between 20 bps and 100 bps, on top of a base insurance charge of between 140 bps to 160 bps.)

For example, MetLife, a leader in the guaranteed minimum income benefit (GMIB) space, raised fees on its GMIB rider in February from 80 basis points to 100 bps, and hiked fees on its limited withdrawal guarantee rose from 65 bps to 125 bps—with additional changes to withdrawal guarantees scheduled for May. Other companies have also changed pricing; AXA cut its GMIB rate from 6.5 percent to 6 percent in November and then down to 5 percent in February. Effective in May, John Hancock discontinued all variable annuity share classes (“Bonus, C and L shares”) except its B-Share Venture product, which costs 50-60 bps less than other share classes. Meanwhile other companies are suspending benefit riders all together. In March, MassMutual suspended the sale of its GMIB riders, as well as the Guaranteed Minimum Withdrawal Benefit formerly available on its MassMutual Transitions Select and MassMutual Evolution variable annuity contracts.

In addition to these changes, many companies are simplifying products. “If you look at a VA prospectus right now, you need a hand truck to carry it,” says Mike Farrell, executive vice president of Retirement & Wealth Strategies at MetLife. “Part of that is the proliferation of funds that are in the product, and some of that will be simplified. I think the days of having 200 different investment portfolios is going to go by the wayside because it is very hard to hedge and maintain the correlation between the performance of those funds and their respective indices.”

Scott DeMonte, of FRC, an industry research group, says many insurers are also beginning to replace active managers with indexed portfolios. “We’re seeing companies make defensive moves and being proactive about the market decline—it’s not great for the investor but we’d rather see that then, heaven forbid, another AIG-type situation.”

In all, VA net assets dropped 24 percent in the fourth quarter of 2008 versus the year ago period, according to NAVA, which kept the acronym but changed its name recently to the Association for Insured Retirement Solutions. Meanwhile total variable annuity sales fell 15 percent in 2008 versus 2007, to $154.8 billion. Although insurance companies expect a continued downward trend in sales and 1035 exchanges (which allow an individual to replace one insurance product for another of a different brand without tax consequences), they hope to see an increased interest in VAs from baby boomers looking for equity growth and downside protection. “The client can see now what he is getting through one of these withdrawal benefits, that was something that may have been viewable only in the abstract five years ago, but we’re seeing it in practice today,” says Cerulli’s Plotnick.

But advisors who use VAs feel they have been blindsided by the polar change to benefits. To some advisors the new products may be good for the insurance companies but too complicated and risky to justify using and too expensive for their clients. As one advisor on our forum asked, “At what point do the VA companies price themselves out of business?”