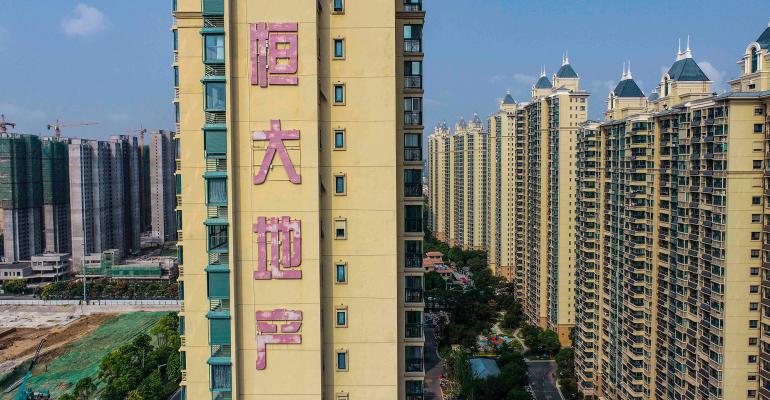 Beijing’s property crackdown has curbed construction activity and squeezed financing to the sector.

(Bloomberg) -- For months in the runup to the 2008 financial crisis, banking heavyweights from Federal Reserve Chair Ben Bernanke on down said the turmoil in subprime mortgages would be “contained.”

That phrase is now making a comeback in Beijing as regulators try to reassure markets that the world’s second-largest economy can weather the crisis at China Evergrande Group. Investors are hoping Chinese policy makers prove more adept at ringfencing the damage than their Wall Street counterparts were.

People’s Bank of China Governor Yi Gang said at a virtual meeting of the Group of 30 on Sunday that authorities “can contain the Evergrande risk” even as the embattled developer “casts a little bit of concern.” Another PBOC official called the situation “controllable” at a news briefing on Friday, echoing statements from several of the country’s largest lenders in recent weeks.

For now, financial markets show few signs that Evergrande’s troubles will spiral into a 2008-like crisis. Credit stress hasn’t spread much further than Chinese developers, while a stable yuan suggests capital outflows are not a concern. Central bankers in South Korea, Malaysia and Europe are sanguine about the risks, while much of Wall Street dismissed comparisons to Lehman Brothers Holdings Inc. China’s sovereign credit-default swaps have slumped in the past week.

One refrain among optimists: China’s government helped engineer the stress at Evergrande by tightening curbs on the real estate industry, and can therefore limit the pain if needed. Regulators told some banks last month to accelerate mortgage approvals in the fourth quarter, according to people familiar with the matter, a sign that policy makers may be taking a softer stance in certain areas.

Still, signs of a spillover into the economy are hard to ignore. Data Monday showed Chinese home sales by value tumbled about 17% in September from a year earlier, while economic growth slowed more than expected. The country’s $12 trillion onshore bond market has also started to crack.

“Real estate is a third of the Chinese economy and it’s the big elephant in the room,” Mark Matthews, head of Asia research at Bank Julius Baer & Co., said on Bloomberg Television Monday. “The issue with these sorts of elephants in the room is that there could be a crisis, but the timing of it is impossible to predict.”

Here’s a sampling of metrics to show whether Evergrande’s plight is being contained:

Stress is evident among China’s real estate sector, which accounts for almost half of the world’s distressed dollar-denominated debt. Yields on Chinese junk dollar bond market -- dominated by property developers -- recently surged past 20% to the highest in a decade. China high-yield credit spreads over comparable Treasuries are near the widest on record -- at about 2,055 basis points on an option-adjusted basis. Investment-grade bonds appear “oversold,” according to Citigroup Inc.

The turmoil has also led to a slump in bond sales. Chinese borrowers have priced only $1.7 billion of offshore dollar notes in October, the least for the period since 2015. Sales in Asia have dropped to $3.5 billion, on track for the slowest month this year.

Elevated dollar-yuan swaps suggest some Chinese banks may be hoarding yuan to hedge against a liquidity squeeze. But the People’s Bank of China is draining funds from the financial system almost daily in October, a sign lenders have adequate cash. Short-term borrowing costs remain low at around 2.1% in the repo market -- which, like in the U.S., is the primary source of funds for the securitized banking system. In other words, China’s interbank lending market is fine.

China’s currency has been resilient through the Evergrande crisis. The yuan has strengthened almost 0.5% against the dollar in the past month. There’s little evidence of central bank intervention, with the nation’s foreign exchange reserves remaining largely stable.

The domestic stock market too is showing signs of calm. While the CSI 300 Index is down 16% from its February peak, much of the decline was caused by official efforts earlier in the year to reduce pandemic stimulus-induced froth. In the past four weeks the gauge is little changed. A gauge of Chinese real estate companies is trading near a three-year low.

The slowdown in the property market is having an impact on the economy, given the real estate industry accounts for almost 30% of gross domestic output and 40% of household assets. The economy expanded 4.9% in the third quarter, down from 7.9% in the previous quarter, according to official data Monday. An energy crisis also weighed on growth.

Beijing’s property crackdown has curbed construction activity and squeezed financing to the sector. Combined contracted sales by the country’s top 100 real estate companies plummeted 36% in September from a year earlier.

Indexes of speculative-grade debt in the emerging world and in the U.S. are showing relative calm, with yields at around 7.2% and 6.5%, respectively. MSCI Inc.’s benchmark of global shares is just 2.2% away from an all-time high. The third-quarter earnings season showed business is booming among Wall Street investment banks. The VIX -- often called the “fear gauge” -- is about 18% lower than its average for the year.

--With assistance from Alice Huang and David Scanlan.