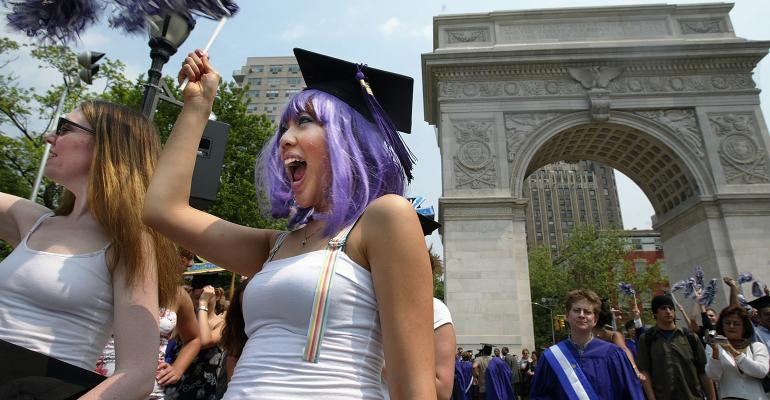 Attending a popular private university such as NYU can leave students (and parents) in major debt. Best to look elsewhere.

New York University is one of the nation’s most popular universities.

In fact, NYU just made the Princeton Review’s 2017 list of dream schools. A regular winner of this honor, NYU is currently the fourth most popular school among teenagers and eighth among parents.

But it’s also one of the nation’s most expensive. NYU hasn’t released its 2017-2018 cost of attendance yet, but the price for the current year is nearly $72,000. The school regularly makes the U.S. Department of Education’s hall of shame list of the private universities with the highest net prices.

The predicament that many parents find themselves in is quite common when students aim for schools in major cities on the East and West coasts. These schools can charge more, and offer stingier, merit awards and financial aid because they can get away with it. Due in part to their location, they can attract enough applicants even as they ratchet up their prices.

Not surprisingly then, you’ll see plenty of these coastal universities highlighted by the federal Center for College Affordability and Transparency, which annually publicizes the names of the schools that represent the 5 percent of institutions with the highest net prices.

In addition to NYU, here are some of the other coastal schools on the federal list:

Elite schools, such as the Ivy League members, have equally high or higher sticker prices, but they don’t make the government’s list because they tend to offer very good need-based aid to those who require it. The most prestigious schools, however, give little to no merit scholarships because they are magnets for rich students who will attend at any price. It may be a financial stretch for many high-income families who haven’t saved enough for a single bachelor’s degree, which now costs upwards of $300,000.

An email that I got from a mother in North Carolina captures the angst that parents can experience when their children financially overreach on their college choices. Here is an excerpt:

My daughter got into the University of North Carolina, Chapel Hill and North Carolina State, but she is determined to go to NYU because she thinks it's the best and will give her all the contacts after college. She is going to pay for it, so she thinks she can do whatever she wants. But she will have a $200,000 debt when she graduates in four years. Her dad and I think this is a huge mistake but she won't listen to us.

This teenager would obviously be making a horrific mistake if she borrowed heavily to attend NYU. With the excellent possibility of staggering debt, she might have to live at home for years, forget about graduate school and turn down unpaid internships during college. She likely wouldn’t have money to buy a house someday.

I told the parents of this young woman that she wouldn’t be able to borrow her way into NYU because no one would lend her that kind of money without an adult cosigner. In fact, the teenager trotted off to a local bank seeking money and was turned away.

Another email came from a dad in Oakland, Calif., who was leaning towards sending his son to NYU even though he would be tapped out by the time a younger son is ready for college. Here is one of his rationales: When else would somebody be able to live in New York City for a year for just $18,000?

The father was referring to the room/board costs for an NYU freshman, but, of course, that is just a fraction of what he’d have to pay. Focusing on the dorm fee for one year would obviously be shortsighted.

An excellent way to avoid these emotional decisions is for parents to use net price calculators for schools before allowing their child to apply anywhere. A net price calculator provides a personalized estimate of what a school will cost a particular family. Schools are mandated by the federal government to post these calculators on their websites, but most parents don't know they exist.

If a net price calculator indicates that a school would be too expensive, families should keep looking — and preferably search for schools that aren’t just located in major cities on the coasts.