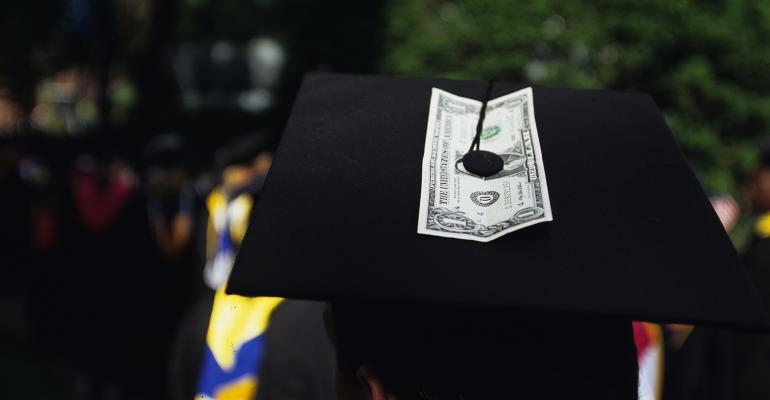 The SECURE 2.0 Act allows investors to roll over unused contributions from 529 accounts to Roth IRAs.

The SECURE 2.0 Act of 2022—a recent move by Congress to allow 529 funds to roll over into Roth IRAs—provides an opportunity for financial advisors to re-engage with those parents who shrugged off college savings in the past. The new legislation will be more beneficial to lower income earners than higher earning clients and works as an avenue for advisors to revisit college planning and introduce retirement planning for children. With the new rollover rule, retail advisors can ease the minds of clients that have been hesitant or confused about how much to put in 529 accounts.

The legislation states that investors can roll over unused contributions and earnings from 529 educational accounts into a Roth IRA for the 529’s beneficiary and the earnings remain tax-free. The amounts are still subject to existing Roth IRA contribution limits—a lifetime $35,000 maximum and a current $6,500 per year. The rule takes effect for the tax year 2024.

This move doesn’t change much for the high-earning investor. As an example, if a client has children ages 5 and 7, the cost of a four-year public education for each of them when they are college age would be approximately $250,000, including room and board. High income earners are likely to target that amount with monthly deposits to 529 accounts. In that light, the $35,000 lifetime maximum is still very low. If those children don't go to college, then the parents or grandparents funding the accounts would still have a lot of money trapped in 529s. The lower maximum could have been by design to avoid criticism. If the rollover maximum was too high, say $200,000, then it could be seen as a handout to the "wealthy."

Any change in investment tax law is a good time for advisors to call their clients for a follow-up assessment or target a new market of possible investors. In addition to helping existing clients ensure they are in products that maximize tax benefits, they can review wealth planning strategies and new or alternative products.

Related: Grandparents Can Give More to College 529 Plans After Rule Change

529 accounts run parallel to Roth IRAs as after-tax contributions and tax-free gains. The difference is that 529s do not have a minimum age for tax free distribution, but do require that the funds be used for qualifying education expenses. Since it can be difficult to know exactly how much an account will earn or exactly how much an education will cost, some people may lean toward underfunding 529s (or not funding at all) in the fear that they will lose earnings or suffer penalties when they pull money and don’t use it for educational purposes. Currently, the client would lose the tax-free status and 10% on the earnings portion. Even scholarships could throw a wrench in the works when 529 accounts had to be planned more carefully.

The new rule is helpful for clients who are concerned they will be penalized if some of the funds go unused once all of their children finish or discontinue their education. Advisors can assure investors that it is best to lean toward overfunding rather than underfunding now as they can take advantage of the benefits more with less risk of penalties. For a reluctant parent who wasn't going to save anything because they were worried the money would be trapped, the $35,000 is a nice incentive to start saving and investing. Since there is a 15-year minimum for rolling the funds over from a 529 to an IRA, it’s best to start sooner rather than later.

This is very particular to a lower-middle class taxpayer whose kids are likely to go to college, but who won't have anything saved and will be reliant on student loans. Those taxpayers likely were never going to save $100,000, $200,000 or more to fully pay for college, but now instead of paying interest, they can earn it in 529s and Roth IRAs. Over the lifetime of the beneficiary, $35,000 (or even less) could grow into a substantial retirement fund.

The SECURE 2.0 Act could also prove helpful for people that may be concerned about an equal division of funds. Perhaps a parent or grandparent has a certain amount they want to divide equally among their descendants regardless of how much college costs. With multiple 529 accounts (one for each), an equal amount of money could be contributed and then differing amounts of leftover could roll into IRAs for each descendant up to the maximum allowance.

The new rollover rule is good news for clients that do not have multiple children in their family to save for as well. If the one college student in the family finishes with money leftover in the account and there is no one else to designate as a beneficiary, the investor can slowly roll the money into an IRA to transfer their assets to future generations. However, it is important to keep in mind that 529 contributions are considered gifts to the beneficiary. Therefore, grandparents should keep annual contributions below the threshold of $17,000.

Adam Brewer is a tax attorney and founder of AB Tax Law in Honolulu, Hawaii.