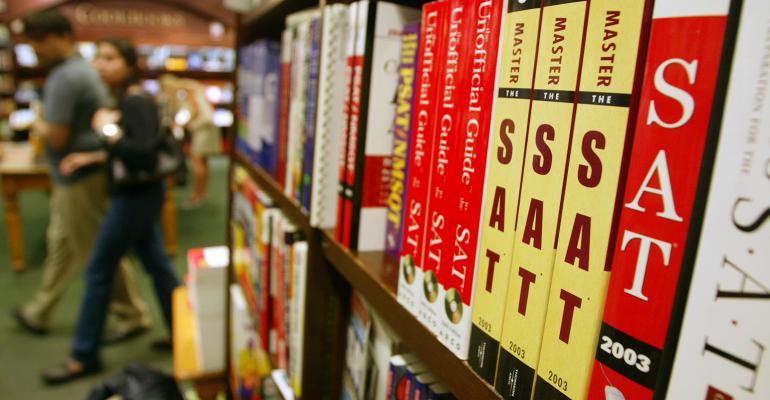 Higher SAT or ACT Scores Can Save Parents a Fortune

Seven testing realities you should know about.

Standardized test scores remain one of the most important college admission factors.

Studies have shown that high school grade point averages continue to experience grade inflation across the country. This has made it difficult for colleges to assume that an “A” average, for instance, really represents excellence.

In my last column, I focused on a new SAT adversity index, which has triggered controversy among the sort of parents whom financial professionals advise. There is, however, much more to know about SAT and ACT developments that could impact the children and grandchildren of your clients.

Standardized test scores are important because they can be highly relevant to a student’s admission decisions, as well as to what kind of financial aid packages and/or merit scholarships an applicant receives. Higher scores can reduce the cost of college by tens of thousands of dollars and sometimes even more.

I decided to write this column about standardized test scores after recently attending a highly informative webinar about SAT/ACT developments that was conducted by Jed Applerouth, the founder of Applerouth Tutoring, whom I consider to be a top source for what’s happening in the testing world. I have included some of his observations along with some of my own thoughts.

Here are seven testing realities that you should know about:

1. The ACT and SAT are not clones, which makes it challenging for students to know what test to take. Some students will do equally well with either one, but a significant number will fare better with one or the other.

Taking a practice SAT and ACT under testing conditions can help a student determine which is the optimum one to tackle. It should be easy for families to find a test-prep firm in their community that will provide free practice tests.

2. According to Applerouth, most students, while prepping in earnest for the SAT or ACT, see score gains through taking three official tests. There is a solid jump from test one to test two with gains in most or all of the sections. Some students take one test and do well enough to quit, but students should plan on three tests in case they need them.

In this chart, you can see the significant growth after students took the test three times. These students finished the third test at the end of their junior year in high school.

3. The SAT and ACT have roughly 80% overlapping content, Applerouth says.

Math represents the greatest divergence between the two tests, with the ACT having harder content. With the SAT, trigonometry is barely tested, and geometry doesn’t make much of an appearance.

In this chart from Applerouth, you can easily see the differences in what each test measures in math:

In comparing science testing, the SAT assesses the ability to read charts, tables, and graphs and expects a high reading level on science passages. The ACT has a greater focus on science fluency and has six to seven questions that require outside science knowledge.

4. The optional ACT and SAT essay is not a big deal and really never has been. Most schools do not care if students tackle either test’s essay. Nonetheless, roughly 70% of SAT takers and over 50% of ACT takers do the optional essay.

Just 23 schools say they require the essay, with the biggest source of this requirement being the University of California campuses. Here are schools that require it:

5. SAT Subject Tests are also waning in popularity, especially after the University of California system dropped the requirement, but they remain important to some prestigious colleges. Every year more schools drop the subject test requirements, as they present an access issue to low-income students.

Very few colleges either require SAT Subject Tests for admission or require them for certain majors. Intensive STEM institutions—Caltech, MIT and Harvey Mudd—require them for all applicants, but they are the outliers. A few more schools recommend or encourage submission of subject tests, so students will want to inquire about this with individual institutions.

Some predict that the language tests, which are the least popular, may eventually be phased out. Modern Hebrew attracted the fewest takers with 330 students. Spanish was the most popular with 19,302 test takers. In comparison, the most popular test was Math Level 2 with 144,772 students sitting for the exam.

6. The number of colleges that are going the test-optional route continues to grow, with the University of Chicago as the most highly ranked university to ditch the rankings. Years ago it was small liberal arts colleges, which conduct holistic admissions, that favored test-optional policies, but now larger institutions are gravitating to it, including such universities as Wake Forest, University of Denver, Marquette and Creighton.

Schools say they have made score submission optional to give low-income students a chance, since test scores are highly correlated with income. Of course, these institutions have always been free to give these students a break regardless of their scores! I believe a bigger motivator is giving themselves a competitive advantage and attracting more affluent students, who happen to have subpar test scores.