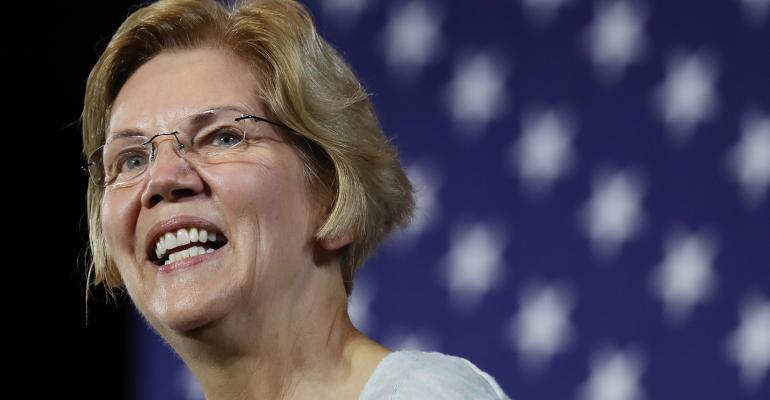 Elizabeth Warren Once Wrote a Book on How to Get Rich

'All Your Worth,’ which came out in 2005 when Warren was a professor, discusses many of the same economic issues she’s running on.

A few years out of college, Sarah Sparkman was struggling with debt. She pored over personal finance books, but says the advice was impractical and the tone often judgmental.

Then she came across Elizabeth Warren’s book.

First published in 2005 and written with her daughter, Amelia Warren Tyagi, “All Your Worth” popularized a simple budget plan: 50% on needs, 30% on wants and 20% on savings.

Sparkman checked the audio version out of her library -- savings: $12 -- in Fayetteville, Arkansas, and listened as Warren and Tyagi offered advice, sprinkled with arguments that the rules of the financial system had made it harder for everyday Americans to get ahead.

For thousands of readers, Warren’s book on personal finance was their introduction to the Democratic presidential candidate, then best known as a Harvard professor who studied bankruptcy. Long before Candidate Warren had a plan for everything from cradle to grave, Professor Warren had a plan for getting your own finances under control.

The book also previewed the campaign she’s run so far: A nuts-and-bolts plan to deal with the large structural problems facing the American middle class with a folksy, can-do optimism.

“What I liked about Elizabeth Warren’s book was that it acknowledged that there are flaws in the system, that it’s more difficult to get on top than for our parents’ generation,” Sparkman said. “She didn’t treat it as a moral failing.”

The advice lines up neatly with her campaign: “All Your Worth” tells readers to pay off debt; the Warren campaign wants to cancel $640 billion of student loans. The book advises keeping the cost of necessities such as child care below half of your income; the campaign wants to ensure that no family spends more than 7% of its income on child care. “All Your Worth” advises black and Hispanic homebuyers to watch out for racial bias; the campaign wants to create a down-payment assistance program for areas that faced racial discrimination in mortgages.

The book led some readers to support the Warren campaign. Jackie Spano read “All Your Worth” at the start of the Great Recession in 2009 to learn more about personal finance, but found herself appreciating the asides where Warren criticized big banks and credit card companies.

“She called it,” she said. “She was going on about how the banks were taking advantage of everyday people and it’s not going to end well. I remember saying, ‘Oh my God, this is exactly what is going on today.’”

Now 35, the Yorktown Heights, N.Y., resident has a Warren sticker on her car and is considering registering as a Democrat for the first time so that she can vote for her in the presidential primary.

According to NPD BookScan, which tracks print and e-book sales, the book has sold more than 65,000 copies in print — roughly half as many as Warren’s 2014 memoir “A Fighting Chance” — but it has something of a cult following online, with the 50/30/20 budget plan regularly cited on financial advice websites.

Harold Pollack, co-author of the personal finance book “The Index Card,” says financial advice alternates between unrealistic plans to save a million dollars by giving up coffee and risky pitches for individual stocks on cable television.

He praised Warren’s book for giving simple, sensible advice for an audience of middle-class readers.

“It’s striking to me how much personal financial advice people get is actually quite negative and even harmful,” he said. “Some of the most valuable things in Elizabeth Warren’s work are the things that she does not write about.”

Warren takes aim at that kind of advice in the introduction to the book, arguing that penny-pinching plans are actually “dangerous” because they distract people from the big picture of ensuring that they can survive a downturn in their finances from a layoff or a medical problem.

She even takes a shot at a certain Manhattan mogul who was running get-rich-quick real-estate seminars at the time.

“We are also not going to say that if you’ll just shift to generic toilet paper and put $5 a week in the bank, all your problems will instantly disappear,” she writes. “A few pennies here and a few pennies there, and the next thing you know, you’ll be debt-free, investment-rich and lighting cigars with Donald Trump. Nope, we’re not selling that brand of snake oil.”

Although she rarely talks about “All Your Worth” on the campaign trail, Warren hasn’t stopped fighting what she views as bad financial advice.

When JPMorgan Chase & Co. drew a backlash in April for a tweet that argued that Americans weren’t saving because they buy fancy coffee, eat out and take cabs too much, Warren joined in, tweeting that it was actually because they lost their “jobs/homes/savings but gave you a $25b bailout.”

She was also a strong advocate for the fiduciary rule, an Obama-era requirement that brokers working on retirement accounts put customers’ interests first when, say, choosing among plans that offer them a commission. A federal court later struck the fiduciary rule down, and a looser “best interest” standard replaced it.

Dennis Shirshikov, a financial analyst at Fit Small Business, teaches a course on the banking system at Queens College in New York. He often suggests the book to students who ask him for personal financial advice.

“You should definitely be honest with yourselves,” he said. “If you enjoy going to Starbucks, there’s no financial police that is going to come and arrest you.”

Sparkman said that giving herself permission to spend money on small luxuries made the book more appealing to her.

“You’re not going to do the financial equivalent of binge-eating under Elizabeth Warren’s plan,” she said.

Ross Gerber, president and chief executive officer of wealth management firm Gerber Kawasaki, said Warren appears to follow her own financial advice. After looking over the financial disclosure forms she was required to file as a presidential candidate, he pointed out that she had maximized her retirement savings and invested in low-cost mutual funds.

“I was impressed,” he said. “She did exactly what we advise clients to do who are teachers like her. She saves very aggressively and she doesn’t live a lavish lifestyle,” he added. “She owns broad-based and well-diversified mutual funds.”

“I wouldn’t call her a risk taker, but it’s a very prudent strategy,” Gerber said.

To contact the reporter on this story:
Ryan Teague Beckwith in New York at [email protected]

To contact the editors responsible for this story:
Wendy Benjaminson at [email protected]
John Harney