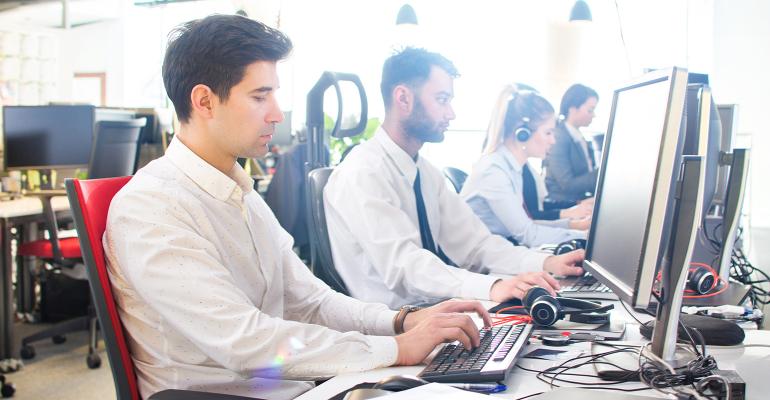 There's more to working in an office than free coffee and water cooler chats: “You miss out on absorbing that problem-solving around you -- the unofficial lessons you get from seeing different salespeople talking to their clients and traders and navigating difficult situations.”

(Bloomberg) -- The career aspirations of a generation of women in finance may hinge on getting back into the office or onto the trading floor.

For female millennials like 24-year-old Ambika Church -- a fixed-income salesperson at TD Securities -- face-to-face interaction with peers and superiors is key to amassing more of the crucial skills needed to keep climbing the steep hill of success in a field still dominated by men. Roughly two years into her career, Church has been working out of her parents’ home in Seattle since April after leaving New York.

“You miss out on absorbing that problem-solving around you -- the unofficial lessons you get from seeing different salespeople talking to their clients and traders and navigating difficult situations,” she said. “I’m still trying to figure out my bag of tricks and how to grow into the salesperson I want to be.”

Women fill barely a third of positions in certain areas of finance. And a prolonged stretch of remote work risks making matters worse for those now entering the industry -- especially when it comes to networking and overcoming biases. In-person interaction is a key aspect of developing the allies needed to thrive, says Lisa Kaplowitz, director of the Center for Women in Business at Rutgers Business School. That’s especially true in professions like banking where senior managers have traditionally skewed male.

Related: Op-Ed: Beyond the Hype, a Women's Initiative That Works

”If you don’t have that face time with your bosses and your managers, you aren’t going to have that repartee with them,” said Kaplowitz, who’s held senior finance posts at companies and worked as a Wall Street analyst. “Women generally haven’t been as confident to have their voices heard even when they are physically sitting together with colleagues. I hear that all the time from women, and that is just compounded when they are on a Zoom call.”

It can’t be stressed enough that for men and women alike, the early years of one’s career are of course pivotal. Yet females have long faced an array of hurdles to advancement, making any setbacks early in their careers even more damaging.

Last year, the average share of female securities, commodities, and financial sales agents was 30%, while women accounted for about 34% of financial analyst positions, according to U.S. Bureau of Labor Statistics data. Analysis by Morningstar Inc. has shown that the percentage of women running the trillions of dollars parked in the global asset-management industry has stagnated over the last two decades -- at slightly more than 1 in 10.

Historically, women have faced greater mid-career headwinds if children came into the mix as they’re often the ones who end up having to make career sacrifices among dual-income, heterosexual families. Women earn about 80% of what men do, according to Census Bureau data.

A Decade of Progress for Working Women Evaporated Overnight

It’s against that backdrop that working from home during the pandemic has provided a sort of “proof of concept” for many career women. That’s even as women may still be assuming a greater burden when it comes to household responsibilities related to childcare.

The percentage of men who provided at least five daily hours of active care for children nearly doubled to 29% from 15% pre-pandemic; for women it rose to 37% from 23%, according to a May survey by researchers at the Center for Women in Business and the Center for Women and Work at Rutgers.

When it comes to work, the increased reliance on video-conferencing risks unintentionally reinforcing biases such as those related to gender and race, says Megan Starr, head of impact at Carlyle Group. The firm has a program called “Better Decisions” aimed at creating tools to build awareness of unconscious biases.

“A lot of those tools and tricks have been even more important in a Zoom era -- as we all shift to video conferencing that can have the negative unintended consequences that reinforces a lot of biases,” Starr said during a virtual panel Wednesday organized by Bloomberg News.

Wall Street workers are starting to trickle back to offices. But most firms still have the vast majority of employees at home with no immediate plans for a major ramp-up of office staffing, especially with infections spiking in some states.

Some organizations have been stepping up opportunities for employees, and women specifically, to network. Women in ETFs, an industry group for over 2,000 members who work in the exchange-traded fund industry, held a Zoom event on June 25 on “communicating when remote.”

But virtual interactions only go so far. Cathy Gibson, head of dealing at Royal London Asset Management, says for staff of all ages the firm is watching out for more subtle stresses that derive from working remotely.

“Zoom and FaceTime communication help,” she said. “But it doesn’t replace face-to-face in ability to sense stress levels. We need to be super-cognizant of looking out for each other.”

Church at TD says she considers herself lucky because she already had a couple years under her belt before the pandemic, and was able to find mentors. But there’s no question she misses the rhythm of her old work life, even though the day-to-day aspect -- such as sharing market intel and communication -- isn’t posing an issue.

‘We’ve gotten some interesting lessons from this time period -- all industries have,” she said. “In an ideal world, I think we would have a mix of the two. There are some advantages of being at home and others that you just can’t get without being in the office.”

--With assistance from Shelly Banjo and Jenny Paris.