Alexandra Armstrong discusses her journey through the past 40 years in the financial services industry. 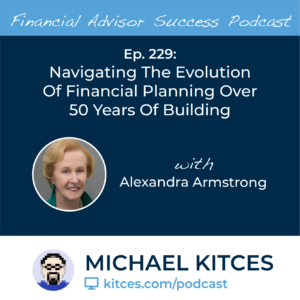 Welcome back to the 229th episode of the Financial Advisor Success Podcast!

My guest on today’s podcast is Alexandra Armstrong. Alex is the founder and chairwoman emeritus of Armstrong, Fleming and Moore, a hybrid RIA in Washington, D.C., that she launched in 1983 and ultimately sold to four successors after a career of over 40 years as a financial advisor.

What’s unique about Alex, though, is that she’s one of the true pioneers in the industry, earning her CFP in 1977 as one of the first CFP classes in the country (and the first person in Washington, D.C., to earn the designation), serving for seven years as the first woman chairperson of the International Association for Financial Planning (which would later become the FPA), championing the initial formation of a group of independent broker/dealers that would eventually become the Financial Services Institute, and serving as a chairperson for the Foundation for Financial Planning, a board that she continues to sit on to this day.

In this episode, we talk in depth about Alex’s journey through the financial services industry at a time when there were even fewer women in the industry than there are today, her appreciation for the fact that she was mentored by two women who were both top producers at their firms in the 1970s (demonstrating that even early on, women could find success in the industry), Alex’s early recognition that providing comprehensive financial planning was a competitive advantage and a way to differentiate herself beyond “just” selling investment products, and the camaraderie that Alex found among other early financial planners from around the country who shared a passion for helping people with their entire financial picture in an industry that was still entirely focused on selling limited partnerships and other financial services products.

We also talk about how Alex’s natural ability as a delegator was (as she puts it) the real secret to her success (as it allowed her to spend more of her time on client-facing activities), the importance of involving both spouses of a client couple in the planning process (going so far as to send each spouse a separate copy of the financial plan before the review meeting so they would each have time to think about any questions they might have) and how having the ability to be picky about who Alex chose to work with helped her foster the formation of lifelong client relationships.

And be certain to listen to the end, where Alex shares why she believes a career in financial planning is ideally suited to women (because it allows them to utilize their emotional intelligence, and gives them the opportunity to do work where they can use their intellect, make a real difference in people’s lives, and earn a good living), how Alex struggled emotionally when it was time to transition out of her own career that meant so much to her (and how she’s found purpose and satisfaction serving on various boards, including her ongoing service to the Foundation for Financial Planning) and how Alex found that transitioning to retirement ultimately wasn’t all that disruptive because of the wisdom that her clients shared with her about retirement after starting their own next chapters.

So if you’re interested in learning about Alex’s pioneering career in financial planning, some of the key lessons she’s learned along the way or how her clients’ experiences entering retirement helped her with her own transition, then we hope you enjoy this episode of the Financial Advisor Success Podcast with Alexandra Armstrong.
END_OF_DOCUMENT_TOKEN_TO_BE_REPLACED