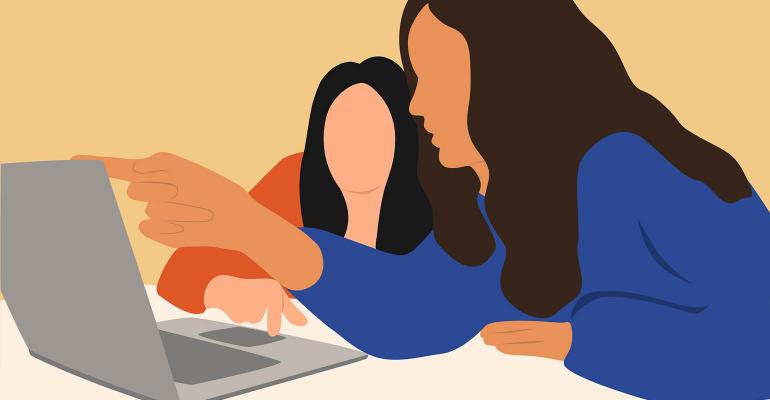 Sometimes, it’s all in how you ask the questions.

As I sought a way to wrap up this series of articles on the topic of mentoring, one concept kept nagging at me: most of the readers are more familiar with the role of being a mentor rather than being a mentee … but the research is conclusive that in order to reap the maximum benefit from such relationships they must be (fully) mutual.

So, for us to be great mentors, we must get something from these relationships, too (beyond the personal satisfaction of having helped another/others); we have to be changed/developed meaningfully, too. In other words, we must be great mentees as well, which raises the question: what does it take to be a great mentee?

If you study the literature on mentee best practices, you’ll learn a lot of things about how to cultivate a relationship with your mentor, please them and get the most out of your relationship (supposedly). Almost anywhere you look, you’ll be advised to ask questions and be open to feedback and respect your mentor’s time and be aware of what you need from the relationship and be an engaging presence in it, etc.

As I delved deeper into this realm, something seemd to be missing … and then it hit me: virtually nowhere in the guidance on how to be a good mentee is there a suggestion that you should contribute to your mentor’s growth and development as well. It’s all about how you can get the most from your mentor and not in the least about what you can contribute to him, her or them. Seems like a pretty big gap.

So when I reframed the question and researched how to engage successfully in reverse mentoring, not only was the trove of research deep, but also more balanced. In fact, the whole premise of reverse mentoring is that it should benefit the, ostensibly, more senior partner in the relationship as well, primarily via a role reversal: engaged successfully, the mentee becomes the mentor and the latter shifts from sage to student.

One similarity remained, though: the guidance is framed virtually exclusively from the perspective of its presumed audience. Best practices associated with being a good mentee are about how to increase the benefit for this relational partner; and those associated with being reverse mentored are presented as maximizing the benefit to the senior partner. I couldn’t find any references to the criticality of the principle of mutual benefit to the ultimate success of these relationships, so one warning that I’d share is not to be constrained by the blinders of your perspective: yes, you can optimize our own participation in the relationship, but the goal is actually to create synergy such that both partners are better off.

As we begin to explore how to be a great mentee and/or engage successfully in reverse mentoring, let’s start with the critical question:

Are you coachable? Given that you’re usually in the mentoring/senior role, are you willing to be led by your mentee/junior?

No, really, after your reflexive response in the affirmative, take a moment to think about this: how coachable are you, really? How good are you at following rather than leading, at taking advice rather than giving it?

OK, assuming that you’re coachable enough to engage successfully in this developmental process, what should you do?

One of the first steps to understanding how to be a great mentee/reverse mentored successfully is to understand what the purpose of the process is:

As Alan Webber, the co-founder of Fast Company, once put it colorfully and bluntly, “It’s a situation where the old fogies in an organization realize that by the time you’re in your forties and fifties, you’re not in touch with the future the same way the young twenty-something’s (are)” because the latter “come with fresh eyes, open minds, and instant links to the technology of our future.”

Or, as professors Jennifer Jordan and Michael Sorell have framed it in a recent article:

Reverse mentoring pairs younger employees with executive team members to mentor them on various topics of strategic and cultural relevance.

Melding these two perspectives, your goal in a reverse mentoring situation should be to ‘get in better touch with the future’ by seeing the world, your organization and, most importantly, yourself through the (wider, brighter) eyes of your younger partner(s).

In this spirit, I’d like to offer three best practices for your consideration and implementation:

1. Make your relationship reciprocal. In fact, rather than conceive of it as “reverse mentoring,” consider it a relationship grounded in “reciprocal guidance.” In this way, its two-way nature is openly disclaimed, which’ll help you be more conscious of its necessary mutuality (which, again, the research shows, maximizes its benefit to both partners). The easiest way to make your relationship reciprocal is to give your mentee a job: just as he, she or they come to you seeking advice on certain topics of great meaning and import, you should do the same. Simply put, ask: identify areas in which their perspective can be particularly helpful and then proactively seek it.

2. Reach out to your reciprocal mentor in a holistic way. Not only do you need to be open, truthful, vulnerable and as transparent as possible in your relationship, but, as the research shows, it should also include both the professional and personal aspects of your life. You’re a whole person, right? So’s your mentee … so your relationship should reflect this.

3. Be prepared to be—and, if necessary, make yourself—uncomfortable. After all, the goal is (mutual) growth and progress, which requires commitment, energy and effort, if not, at times, a discomfort bordering on pain. As Lisa Quast and Kristi Hedges have advised, “The goal is to ‘push one another outside of their comfort zones and try new ways of thinking, working and being.’” In other words, if you’re not challenging your partner mightily and she’s not doing the same with you, you’re both losing out. Or, to paraphrase my late, legendary college track coach Bill McCurdy who put it so bluntly and indelibly: in your reciprocal mentoring relationships, if there’s no (mutual) pain, there’s no gain.

One final bonus best practice: the research shows that reciprocal mentoring can be especially beneficial in promoting Diversity, Equity, Inclusion & Belonging (DEIB). Beyond the obvious and most common scenarios, like older, straight white male executives mentored by young professionals of color or those who are members of the LGBTQ+ community (or some combination thereof, which is what the concept of “intersectionality” is all about), there are myriad other possibilities, including relationships that span functional and/or divisional boundaries within an organization or those that introduce domestic colleagues to their international counterparts, etc.

The point is to get creative at crafting opportunities for such exchanges while being fully inclusive: not only should a broad array of earlier-career professionals have the opportunity to guide their senior/executive colleagues, but the latter should be strongly encouraged (if not required) to engage with the former. In this way, ever more of an organization’s (or individual’s) human capital can be engaged synergistically.

A final caveat: it’s imperative that as you engage in this reciprocal mentoring relationship you remain mindful that, as one organizational consultant has framed it, “There is a distinction between mentoring and (giving) feedback.” Specifically, the former “is meant to expand people’s skill sets and networks” over time, so it’s not just about situational/transactional/tactical exchanges, but about cultivating the kind of relationship that enables the free, two-way and unbounded flow of mutually beneficial inquiry and advice on an on-going basis.

In so doing, not only will you have the opportunity to foster greater Diversity, Equity, Inclusion & Belonging in your personal networks as well as in the organizations with which you’re affiliated, but you’ll have the opportunity to be ever more stimulated and motivated to pursue your personal developmental journey in ways that both increase your contribution as well as cultivate a greater sense of gratitude and fulfillment along the way.

Isn’t this why you became a leader in the first place? To make a real difference? Great: now you know how to be led to make this happen.