A fierce satire of an American corporation that at one time made something tangible and useful but, as the novel opens, has succumbed to “financialization” and its fantasies. BSI prospered making copier machines and copier supplies. But the margins were not good enough for the slick suits in the corner office who decide to shift the focus from actually making things to pimping a meaningless abstraction called “Optelligence.” The only thing Optelligence manufactures is corporate jargon of the most odious (and hilarious) nature. Along the way, the tightly drawn characters are reduced by every function of the enterprise, from human resources to corporate communications to nefarious consultants. The book, in short, offers a colonoscopy of the contemporary corporate world. A very funny novel written by two highly observant survivors of the world they are lampooning.

Takeaway: Telling the truth is the key point of crisis communications.

Quotation: “Anyhoo, we got rid of timecards—thank God! Now we use TEPIL to bucketize our work and track productivity in fifteen-minute increments.  Just choose one of the fifty-six sanctioned workplace activities from the drop-down menu.”

Jason Stafford did not intend to break any securities laws—at first, anyway. It was all a big mistake. Post-dating losing trade tickets actually improved the firm’s bottom line. When he gets out of federal prison, Stafford is barred from trading, but given an opportunity to use his skills to investigate the suspicious activities of a trader who went missing. The novel offers an intriguing look at the schemes financial traders use to skim money and take advantage of information asymmetries. There is a subplot about how much a man can trust his wife when he tries to protect their assets by putting them in her name. (Spoiler alert: not much.) The fun is in watching novice sleuth Stafford uncover a conspiracy of hidden trades and profit-skimming.  Michael Sears was a bond trader before he started writing bestsellers and his experience shows.

Takeaway:  No one asks why when you're making money.

Quotation: “At that moment, I still had every intention of correcting that one trade just as soon as we had one good day.”

3. Thank You for Smoking

Thank You for Smoking

Joke for joke, Thank You for Smoking may be the funniest satire of big business ever published. The book skewers the firearms, alcohol/spirits, and tobacco industries by chronicling the three lobbyists—or M.O.Ds (Merchants of Death)—defending their clients with spurious and self-serving research. Of the three, the chief spokesman for the Academy of Tobacco Studies, a firm that promotes the benefits of cigarettes, comes under most hilarious scrutiny.  Nick Naylor is smart and not entirely deluded about the dubious cause he is defending. The fun is in going along for the rhetorical jujitsu Naylor wields to

confuse and stymie Big Tobacco’s opponents. Business, politics, and special interests collide in this provocative satire, illuminating the ways corporate communications can be mishandled by slick professionals who put dollars ahead of principle.

Takeaway:  You don’t have to believe in the cause you represent. But it helps.

Quotation:  “It pays the mortgage,” Nick said. He had offered this rationalization so many times now that it was starting to take on the ring of a Nuremberg defense:  I vas only paying ze mortgage . . .

4. The Bonfire of the Vanities

The Bonfire of the Vanities

Wolfe coined the term “Masters of the Universe” to describe WASP bond trader Sherman McCoy, the protagonist of this sprawling, satirical novel that has been called the quintessential novel of the 1980s. McCoy is sitting at the top of the world when greed, arrogance, and recklessness conspire to destroy everything he worked for. He is deserted by his wife, colleagues, and friends. Even the mistress McCoy tried to protect turns against him. McCoy’s life unravels against a society in almost complete collapse. The satire targets Wall Street, greed, racism, snobbery, the media, and the justice system with equal cynicism. Wolfe’s genius is making funny a world so corrupt and cynical that it still has the power to shock three decades later.

Takeaways:  Arrogance is a financial professional’s worst enemy. Humility is the best antidote to arrogance. No individual or institution can survive fearless satire.

Quotation: “How the stories circulated on every campus! If you weren’t making $250,000 a year within five years, then you were either grossly stupid or grossly lazy. That was the word. By age 30, $500,000–and that sum had the taint of the mediocre. By age forty you were either making a million a year or you were timid and incompetent. Make it now! That motto burned in every heart, like myocarditis.”

Fraud in the markets used to be much more rampant, and much more winked at, than it is today. This novel fictionalizes one of the most celebrated fraud cases of the 1930s.  Guy Prime was a real trader who was born into wealth, worked on Wall Street, and ended up in prison after his embezzlement was exposed. The scandal revealed the hypocrisy of the old-boys-club of the Stock Exchange, ending the system of self-government by mutual trust among supposed gentlemen. The Embezzler is a novel that illuminates the practices of Wall Street in the days before the SEC was established. Born into blueblood wealth, Louis Auchincloss (1917 - 2010) is remembered as a novelist who parlayed his family’s experiences into books exploring the experiences of American old money.

Takeaways:  Institutions cannot be trusted to regulate themselves. Endure that every participant has a voice. If you are not seated at the table, then you are on the menu.

Quotation: “I am a symbol of financial iniquity, of betrayal of trust, of the rot in old Wall Street before the cleansing hose of the New Deal.”

Catch-22 is a satiric novel set during World War II. Heller writes insightfully about management, hierarchy, miscommunication, and corporate culture. Most readers are familiar with the antihero, B-25 bombardier Yossarian and his encounter with the celebrated Catch-22, a phrase that has entered common usage as a no-win situation. Most of the business lessons of the book are inspired by the exploits of mess officer Milo Minderbinder who creates a syndicate that controls the black market. The imperatives of the syndicate soon trump the aims of the war. Heller has fun skewering the amorality of capitalism by showing Minderbinder taking on increasingly audacious business measures, including an agreement with the Germans to bomb his own squadron. It’s just business.

Takeaways:  The bureaucracy is more dangerous than the enemy. The biggest risk to organizations is unquestioning obedience to orders from the top, carelessly interpreted by those in the middle, and mindlessly executed by those on the front lines.

Quotation:  “[They] agreed that it was neither possible nor necessary to educate people who never questioned anything.”

7. The Man in the Gray Flannel Suit

The Man in the Gray Flannel Suit

This groundbreaking book explored American employee conformity and started a conversation about the search for purpose in a world dominated by late-stage capitalism. That conversation continues to this day. This novel joins two others on this list which were so popular their titles entered the popular vernacular, in this case as a reference to America's discontented businessman. The details The Man in the Grey Flannel Suit surveys are right out of an episode of “Mad Men.” It’s 1953 in Westport, Connecticut. Tom and Betsy Rath, a young middle-class couple, struggle to find purpose and meaning in the hectic and material culture they inhabit. Money is always on their minds. They are ashamed about their house. Tom gets a job in public relations, surrounded by politicking yes-men.  Overwork and alcohol damage his relationships with his family. The wife is shown to be smarter and more clear-eyed than the husband. In the end, Tom turns down a promotion to a high-pressure position, in order to spend more time with his family.

Takeaways:  Work-life balance has been an issue for a long time. Listen to your wife. Don’t assume you understand new media (in this case, television). Be content with what you have. Only then can you begin to create your own version of the American Dreams.

Quotation:  “I don't know anything about public relations.” “Who does? You've got a clean shirt and you bathe every day. That's all there is to it.”

The Fountainhead may be the most controversial title in this series. There is no book at once more celebrated among those who encountered it first in high school and more reviled by critics and philosophers. Today, with Rand’s Atlas Shrugged, it has a cult following as a work more of philosophy than literature. Still, the book is a deep dive into post-war industrial America and the debate between individualism and collectivism. The sprawling story follows an architecture school dropout named Howard Roark and how he navigates—or fails to navigate—the New York architecture scene. Roark epitomizes individualism. He refuses to compromise his values, apologize for rejecting altruism or show second thoughts about pursuing his own self-interest above everything—and everyone—else.

Takeaways: Know what you want. Have big goals.  Think for yourself. Selfish values are not evil.

Quotation:  “A truly selfish man cannot be affected by the approval of others. He doesn’t need it.”

The business is Hollywood show business, but the business themes are universal.  What we have here is a rags-to-riches story chronicling the rise and fall of fast-talking Sammy Glick who climbs the ladder of success by deceiving and backstabbing basically everyone he encounters.  The story is told in the first person by Al Manheim, a drama critic who gives Glick his first break. Manheim, representing business decency in all things, is both fascinated and disgusted by Sammy’s rise to the pinnacle of Hollywood success. Mostly he can’t look away and follows Glick to Hollywood. There he becomes determined to discover the frenzied source of Sammy’s ambition, or as he repeatedly asks himself, What Makes Sammy Run?  Like the hero of Citizen Kane, Sammy Glick ends up fabulously rich and successful but desperately alone.

Takeaway: Be nice to people on the way up because you will meet them on the way down. Running after success is fine but not when you run down people, principle, and decency in the process.

Quotation: “I suppose it's too bad people can't be a little more consistent. But if they were, maybe they would stop being people.”

10. The Rise of Silas Lapham

The Rise of Silas Lapham

One of the first realist novels, The Rise of Silas Lapham concerns an entrepreneur who gets rich in the mineral paint business in the years before and after the Civil War. The middle class is beginning to form and the market for fire-resistant paint is booming. The paint Lapham’s company manufactures allows the striving middle class for the first time to emulate the glossy lifestyles of the wealthy. While other contemporary novels were moralistic and sentimental about business, Howell painted a clear-eyed picture of business corruption that is familiar to modern readers. It was one of the first novels to describe bankruptcy (in those days a condition almost too shameful to describe) and its effects. At the end of the novel, Lapham confronts a choice between compromising his ethics or go bankrupt.

Takeaways: Invest in a business you are passionate about. Don’t be so fixated on ownership that you reject offers of capital. Understand the financials. Treat partners fairly. The skills you use to take your company to one level of success will not necessarily be the skills that will take you to a higher level of success.

Quotation:  “The world generally knows what it's about and knows how to drive a bargain.” 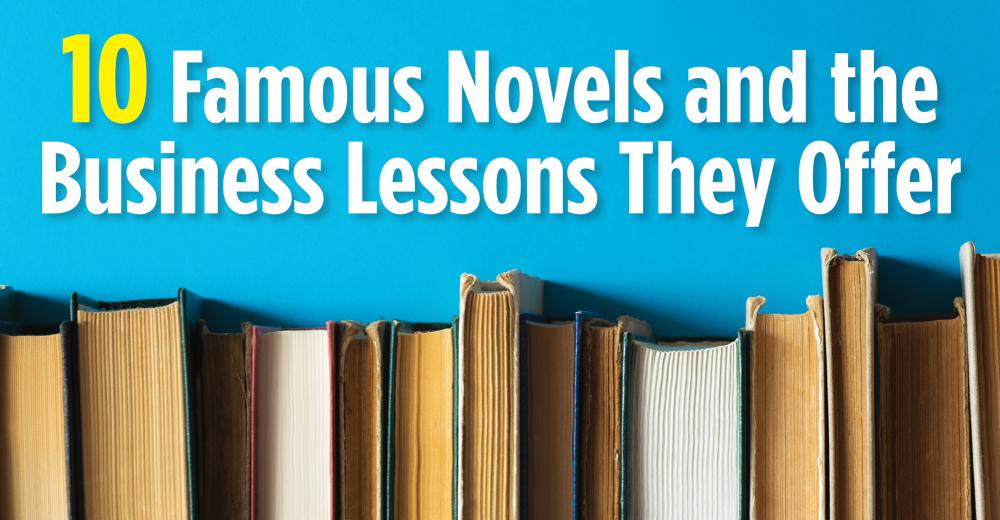