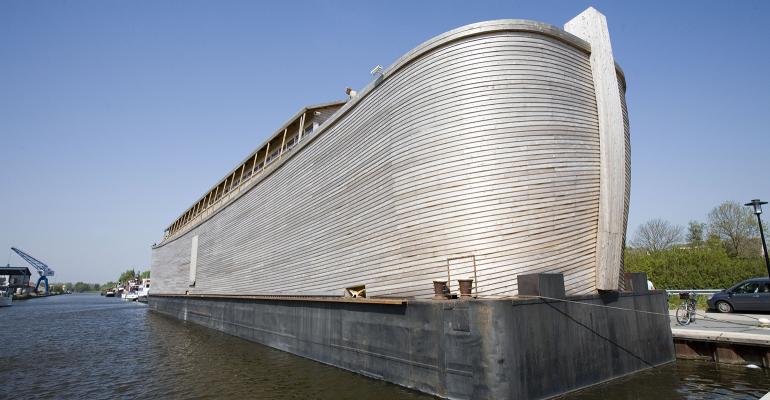 <p>A replica of Noah&#39;s ark was built in the Netherlands in 2007.</p>
Practice Management>Business Planning

The best succession plans are the ones put into place long before they are needed. Rarely, however, does this actually happen. Below is a real-life example* of what occurred when an RIA founder actually practiced what Cushing preached.

Ryan is the founder of Vision LLC, a registered investment advisory firm managing $500 million in assets for wealthy retirees in Scottsdale, Arizona. In 2006, Ryan was 55, physically and fiscally fit, with a thriving practice and capable staff. He knew that one, if not both, of his two teenage children would eventually join the firm to continue his legacy.

Though Ryan had no need to change anything, he was a planner who believed in diversification. The majority of his personal net worth was in the equity of Vision, and he wanted to leave his family with a flexible financial legacy in case either of his children decided not to join the family business. Ryan monetized a portion of his firm by selling a minority interest to a company that had the capability to provide him with consultative growth support and expertise, yet allowed him to continue running Vision his way.

Ryan knew that he needed additional team members to secure the future growth of his business, and he sought the help of this external partner to help find the same. Ryan did not expect to find all these people immediately, but he knew he had to start the process to create his ‘dream team’ and continue growing. First, Ryan needed a chief operating officer who could take over the day-to-day operations of the firm, so he hired 40-year-old Mark in 2007. Mark had the strategic, technical and operational experience in the industry that Ryan needed and, more importantly, fit in culturally with the firm.

Then, Ryan sought younger advisors looking to join a larger firm like Vision that would allow them to leverage its resources to grow faster. Ideally, he wanted one advisor to have an expertise in financial planning and another with a talent for business development. Becky, who was 45 years old at the time, saw the potential in combining forces and joined the firm in 2009 through a merger of her $200 million women-focused planning firm with Vision LLC. Ryan was already two-thirds of the way to his goals within three years of starting the wheels in motion.

David, another advisor with expertise in financial planning, joined Vision in 2008 from a local bank but did not quite fit, and he and Vision amicably parted ways in 2010. Ryan was astute enough to realize that not all plans work out, and he continued to look for talent with his external partner. Together, they found talented 38-year-old Timothy, a terrific addition to the team who added his $300 million retiree-focused practice in Tucson through a merger with Vision in 2012.

Finally, as predicted, Ryan’s daughter joined the business in an operational role in 2015, but his son did not. Ryan now holds a minority position in Vision LLC, while his partners Mark, Becky and Timothy are collectively the majority owners. His daughter does not aspire to be an advisor or run the firm, and Ryan’s decision to sell some of his equity proved to be a financially prudent one for his family. Ryan hopes to work for another five years and, eventually, hand over his residual ownership to his daughter. Through patience, foresight and ability to plan ahead, Ryan has been able to forge a growth path for his firm and a succession path for himself.

What can advisors learn from Ryan?

*All names and locations have been changed to protect privacy.

Rajini Kodialam is the co-founder of Focus Financial Partners LLC.