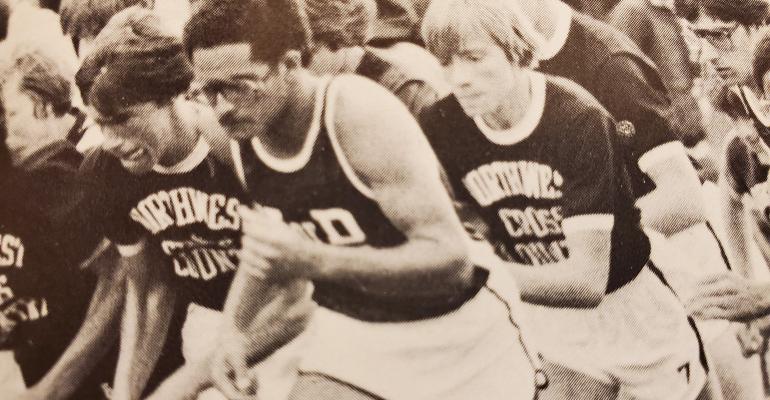 The author, Walter Booker (glasses, front), at the start of a race in 1979.
Practice Management>Business Planning

In business, as in athletics, knowing the right time to slam on the gas is key.

Although you can’t really tell from looking at me now that I’m decades past my athletic career and clearly built more for comfort and speed, at one time I was, in fact, a competitive athlete, and many of the skills that I learned in this effort have helped me throughout my professional life. But one of them I lost for an extended period of time and have only recaptured recently is the concept of "Go Time!" Perhaps it can help you as well.

"Go Time!" essentially is that point during a race, typically when the pain of one’s exertion is present in full, that you kick it up a notch or two, especially to impose your will on competitors: if they can keep up with you, great, and if they can’t, so much the better. The real art to "Go Time!" is understanding when to pursue it.

I’ve made all of the mistakes: going out too fast early in a race and finding myself struggling to hang on at its end; in a distance race, waiting too long to begin my kick or, in a sprint, taking too long to get into my highest gear; and paying too much attention to what my competitors were doing and forgetting to focus on my own race and strategy, which occasionally led me to forget about the "Go Time!" opportunity altogether. As a runner, there are few things more embarrassing than coming to the end of your race and realizing that there’s no time left for you to make your move.

So how can "Go Time!" help us in a professional context?

Well, first, in order for it to be effective, it requires that we have a strategy for a given day’s or week’s or project’s work and that we’ve analyzed it to identify when making such a move would seem most prudent. Once we begin to implement our plan, of necessity, we’ll adapt it to the circumstances: our day/week/project may be going better than expected or less well, both of which affect the timing for this move.

And what does "Go Time!" look like in a professional context?

It could look like leveraging your and/or your team’s early momentum to press to bring a project to an end under budget and well before its deadline. Or it could look like shaking the team up and reassigning roles and responsibilities relatively early in the project timeline if the initial performance is underwhelming. Or it could look like investing an extra hour at work today to finish a project so that you can sign off an hour early at the end of the week to spend more time with your family. etc.

In my experience, the key consideration with respect to the pursuit of "Go Time!" is its timing: when is it a good idea to begin your push? In business as in athletics (and apparently comedy), I’ve found, timing is everything. Simply put, if you press too hard too soon, you can burn out and underperform, or if you wait too long, your push will have a muted impact. Ultimately, we’re are seeking a solution that reflects the Goldilocks Rule of being "just right." But when is this, exactly?

While there are no hard and fast rules, here are a few of my suggestions:

When you’re ahead of schedule, I find "Go Time!" to be most impactful in the third quarter of your effort, which is typically the time when its challenge begins to be felt fully, which, if not addressed smartly, could lead to the squandering of your fortunate position. Essentially, this means refocusing yourself and/or others once you’ve passed the half-way point and can see the finish line but realize how far away it is, how much time, energy and other resources that’ve been consumed to this point as well as what’ll likely be needed to the finish. "Go Time!" can be a way to revitalize your otherwise (potentially or actually) flagging efforts and, in so doing, to reestablish and/or enhance a momentum that’ll carry you to the finish successfully.

Another "Go Time!" opportunity is when an effort experiences underperformance relatively early: in the second quarter thereof, shaking things up a bit, either by realigning people, roles and responsibilities or by re-conceptualizing and re-planning the endeavor, can prove instrumental in (re-)establishing a positive and sustained momentum that leads to ultimate success. The challenge in such situations is to be patient: while it’s tempting to want to switch it up immediately once you sense sub-optimal performance, it’s imperative that you investigate its causes before mixing things up. After all, the goal just isn’t to make change, but to identify the right solutions that’ll lead to performance that’s both meaningfully enhanced and, most importantly, sustainable over time.

As with all leadership, there is more art than science to this, so be sure to listen carefully for that quiet inner voice: if you commit to developing yourself and those whom you serve continuously, intuitively you’ll begin to sense the opportunity and hear yourself saying "It’s ‘Go Time!"