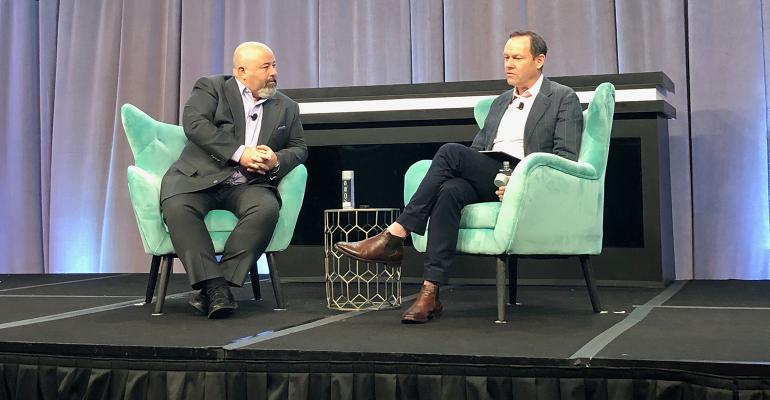 Bill Crager on Leading Envestnet Through Grief and Sorrow

Envestnet President Bill Crager got a devastating phone call on Oct. 3 when he learned that Envestnet co-founder Jud Bergman had passed away. Here’s what happened next.

The industry was shocked to learn of the sudden passing of Envestnet CEO Jud Bergman and his wife, Mary Miller, killed in a tragic car accident on Oct. 3. Bergman’s co-founder and friend of 20 years, Envestnet President Bill Crager, was not prepared, personally, to receive that phone call informing him of what had happened. But he and the company had a plan in place, and his actions over the next few days and weeks are a testament to proper succession planning.

“I may be the 2019 poster child for succession, but it is essential no matter how big or small your business is,” Crager said, speaking at the MarketCounsel Summit in Miami this week.

Before Bergman died, the two execs had a plan in place for him to eventually transition to chairman, with Crager moving into the chief executive position.

Crager recalled speaking to Bergman the night before he died. “It haunts me,” Crager said. Bergman was in San Francisco visiting his wife’s daughter, and Crager wanted him to join him in Pebble Beach, Calif., for some golf.

“That phone call was so profound and so shocking because of the momentum of that man,” Crager said.

When Crager was in college, he lost his father, who was 50 at the time, suddenly. All those feelings came rushing back to him. At the same time, he knew the business had to run.

There was a short period of time before the world found out about Bergman’s death, and he wanted to try to get ahead of this tragic news; Crager immediately called the other senior people on the Envestnet team, opened up a line and updated everyone on what had happened. “This is family, so it’s hard.”

He convened the board of directors of the company and advised them to meet. Envestnet is a publicly traded company, so that presented its own wrinkles in terms of how they spoke to investors about the situation. There were legal and communications matters to navigate. As the news broke, Crager was appointed the interim CEO.

“We took charge of the organization.”

Crager also had to address the whole company, not an easy task. His message: how to take the purpose of the company and make sure it prevails. He said he was proud of the Envestnet team and how everyone pushed through that week and honored Jud in a profound way.

“We’re promised in life that there will be suffering,” he said. But how you prepare for it is key.

Losing a founder is a deep risk that one cannot imagine, he added. His advice to advisors who unfortunately could find themselves in a similar situation? Protect yourself, your business and the people who work for you. Set yourself and your business up to not just endure a tragedy like this, but also flourish and pursue the vision of the founder.

Of course, you’re never prepared for the personal side of such a tragedy, Crager said. While he knew what he had to do and went to work, the grief and mourning were a constant presence. He had a constant uneasiness.

Crager was very close to Bergman, whose firm had acquired a business he created. The two men spoke every day for 20 years.

They were both there to ring the bell at the New York Stock Exchange in July 2010, when the firm launched its initial public offering. For Bergman, that moment was about what’s next for the company.

His job now is to make sure they don’t stop and keep pushing forward with Bergman’s vision. “This is not a tragedy that we’re going to endure.”