/sites/all/themes/penton_subtheme_wealthmanagement/images/logos/footer.png
Recent
Recent
A Boom In Texting Spurs Latest Smarsh Acquisition
May 17, 2022
11 Must Reads for the CRE Industry (May 18, 2022)
May 17, 2022
Apple Delays Plan to Have Staff in Office Three Days a Week
May 17, 2022
Will Inflation Derail the Recovery in Restaurant Dining and Leasing?
May 17, 2022
Featured
The 10 Best and 10 Worst States in Which to Retire in 2021
Jul 15, 2021
Poll: 15 Classic Books on Investing and the Markets
Apr 03, 2020
Fifteen Must-Listen Business Podcasts for Advisors
Aug 14, 2020
Celebrity Estates: Jay Leno and Planning for Classic Car Collections
Feb 22, 2022
The Intelligent Investor
brought to you by 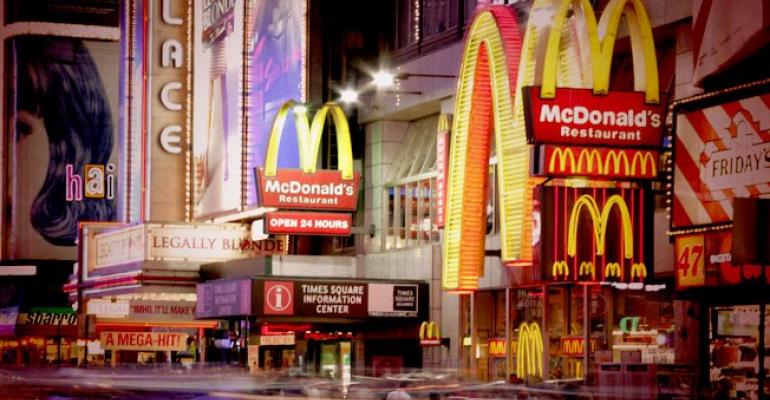 McDonald’s Is Still on the Value Menu

McDonald’s (MCD) is up 16% since we added it to our Most Attractive Stocks list in November of 2012, and I still see plenty of value for hungry investors.

Over the past ten years, McDonald’s has written the textbook on how to successfully run and expand an already large business. Since 2002, McDonald’s has grown (NOPAT) by 12% compounded annually.

As I recently discussed in my Wal-Mart article, significantly growing NOPAT while maintaining a highROIC is difficult for companies with brick and mortar stores. The increased invested capital required to build new stores usually results in a short-term decline in ROIC. Figure 1 shows that MCD has not had this problem.

Simultaneous high growth and ROIC increases prove MCD’s management team takes care of the real bottom line as well as (or better than) any other and is a proven shareholder value creator.

Despite MCD’s excellent track record for profit growth, the bear argument on MCD focuses on its limited growth potential. Bears say growth will stall due to increased competition and market saturation, and I disagree on both fronts. On the competition front, I wrote on Nov 13, 2012:

Nothing has changed on that front.

Meanwhile, MCD has no plans to slow its growth. The company is investing over $3 billion in stores this year. $2 is targeted for new stores as the firm adds to its global footprint of 34,000 stores, including 20,000 international locations.

Given McDonald’s proven track record of growing and creating shareholder value, it is hard to make a straight-faced argument that the $3 billion investment in new and existing stores will not produce any profit growth.

I think the only argument is how fast MCD will grow. I expect they will grow faster than their top competitors, SBUX and YUM who are spending $1.2 billion and $1 billion, respectively, on stores in 2013. If the companies’ ROICs are the same in 2013 vs 2012, MCD’s profit (NOPAT) growth will be almost triple that of SBUX or YUM.

The risk of ROIC decline is far greater with SBUX and YUM as they have not proven, as MCD has, that they can grow and maintain ROICs. SBUX and YUM have a long way to go before they can match MCD’s success.

I see no reason why MCD’s long track record of success will not continue as the company continues to expand..

Take Advantage While the Stock is Still Cheap

Currently, MCD is trading at a price to economic book value ratio of 0.94, meaning the market is forecasting a permanent 6% decline in profits.

The stock market is giving MCD no credit for the company’s proven track record of value creation and strong growth potential. Instead, the market predicts MCD’s profits will permanently drop. I think it is pretty clear the market’s expectations are too low for MCD. Investors should take advantage.

ETFs and Mutual Funds with MCD

It appears institutional investors aren’t recognizing the value in MCD. There are no ETFs or mutual funds with sufficient liquidity and significant allocations to MCD that earn an Attractive-or-better rating. No wonder so many active managers underperform.

The best way to get this stock is to buy it directly – and you don’t have to pay any management fees.

André Rouillard and Sam McBride contributed to this article.