Philanthropy Tax E-Letter
brought to you by 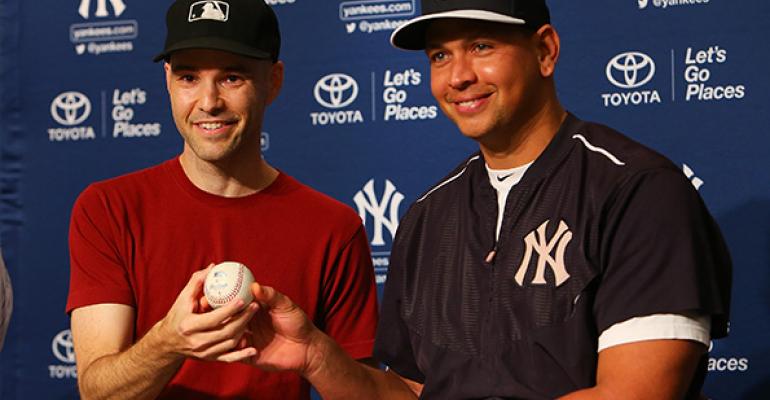 Not Just Any Major League Baseball

It’s the one that Alex Rodriguez hit into Yankee Stadium’s right-field stands on June 19 marking his 3000th hit. The ball was caught by a fan, Zack Hample.

When the ball left Rodriguez’s bat, its retail price was $20. But the second Hample caught the ball it became worth its fair market value (FMV)—what a willing buyer would pay to a willing seller, neither being under any compulsion to buy or sell, and both having reasonable knowledge of relevant facts. Treasury Regulation Section 20.2030-1(b). For a ball-park (out-of-the-ball-park) valuation, let’s say $150,000. 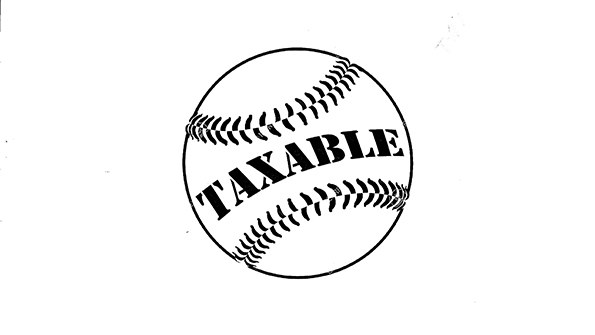 Soon after catching the ball, Hample refused the Yankees’ request to give the ball to Rodriguez, saying that he might sell it. But he left the door open for negotiations.

A few weeks later the Yankees agreed with Hample that the team would give $150,000 to Pitch in for Baseball, a charity that distributes baseball equipment to deprived areas in the United States and abroad. Hample, according to news reports, had contributed to that charity over the years.

The Yankees, in addition to contributing $150,000 to Pitch in for Baseball in exchange for the ball, gave Hample two signed bats, one with the inscription “Nice Catch.” He also got a jersey autographed by Rodriguez.

Sports and tax fans—another development. The Yankees had earlier disputed its contractual obligation to pay Rodriguez a $6 million home-run bonus, claiming that he was no longer “marketable” because of his year-long drug suspension. To settle that issue, the Yankees and Rodriguez agreed that in lieu of the $6 million bonus, the Yankees would contribute a total of $3.5 million to: the Special Operations Warrior Foundation, the Boys and Girls Club of Tampa, Florida; Pitch in for Baseball; and the MLB Urban Youth Foundation.

Now For the Tax-Game Analysis

Now for the tax-game analysis. I only know what I read in the sports pages. So not having seen any written agreements or heard any oral ones, I am mindful of Sherlock Holmes’ admonition to Watson: “It is a capital mistake to theorize before one has data. Insensibly one begins to twist facts to suit theories, instead of theories to suit facts.” A Scandal in Bohemia — Arthur Conan Doyle. So my analysis may be out in left field.

Income to Hample who caught Rodriguez’s home-run ball. On catching the ball, he had income equal to its FMV. That value is a fact question (willing buyer pays a willing seller, etc.). Assume $150,000.

Let’s go to the record book—an oft-cited case, Cesarini v. US, 296. F. Supp. 3 (1969), affirmed, 428 F.2d 812 (6th Cir. 1970). In 1957, the Cesarinis bought a used piano at an auction for $15, and was used by their daughter for piano lessons. In 1964, while cleaning the piano, they discovered $4,467 in “old currency.” Being unable to ascertain who put the money there, the Cesarinis exchanged the old currency for new bills at a bank. They reported $4,467 on their 1964 joint income tax return as ordinary income. Having second tax thoughts in October 1965, they filed an amended return eliminating $4,467 from their gross income computation and requested an $836.51 refund (the amount they claimed they overpaid as a result of the former inclusion of $4,467 in the original return). The Interal Revenue Service rejected their refund claim and the Cesarinis sued in a U.S. District Court for a refund.

Let’s go to the IRS rulebook. Internal Revenue Code Section 61(a) states: “Except as otherwise provided in this subtitle, gross income means all income from whatever source derived…”

The U.S. District Court judge goes right to the top:

The IRS Cited its Own Revenue Ruling

The IRS cited its own revenue ruling. “The finder of treasure-trove is in receipt of taxable income, for Federal income tax purposes, to the extent of its value in United States currency, for the taxable year in which it is reduced to undisputed possession." Rev. Rul. 61, 1953-1, CB 17.

The District Court judge agreed with the IRS revenue ruling:

…[T]he arguments of the taxpayers which attempt to avoid the application of Rev. Rul. 61, 1953-1 are not well taken....The other branch of their argument, that found money must be construed to be a gift….In addition to the numerous cases in the Supreme Court which uphold the broad sweeping construction of Section 61(a) found in Treas. Reg. §1.61-1(a), other courts and commentators writing at a point in time before the ruling came down took the position that windfalls, including found monies, were properly includable in gross income ….While it is generally true that revenue rulings may be disregarded by the courts if in conflict with the code and the regulations, or with other judicial decisions, plaintiffs [the Cesarinis] in the instant case have been unable to point to any inconsistency between the gross income sections of the code, the interpretation of them by the regulations and the courts, and the revenue ruling which they herein attack as inapplicable. On the other hand, the United States has shown a consistency in letter and spirit between the ruling and the code, regulations, and court decisions. [Emphasis by court]

And the judge did his own homework:

Although not cited by either party, and noticeably absent from the Government's brief, the following Treasury Regulation appears in the 1964 Regulations, the year of the return in dispute:

"(a) In general. In addition to the items enumerated in section 61(a), there are many other kinds of gross income***Treasure trove, to the extent of its value in United States currency, constitutes gross income for the taxable year in which it is reduced to undisputed possession." [Emphasis by court]

Identical language appears in the 1968 Treasury Regulations, and is found in all previous years back to 1958….

That brought the judge to the Cesarinis’ second contention: That if any tax was due, it was in 1957 when the piano was purchased, and by 1964 the Government was blocked from collecting it by reason of the statute of limitations.

…[T]his Court finds that the $4,467 in old currency was not "reduced to undisputed possession" until its actual discovery in 1964, and thus the United States was not barred by the statute of limitations from collecting the $836.51 in tax during that year.

The statute of limitations issue hinges on when the finder of an object takes possession. That’s determined by state law.

It has been said that a footnote is like having to go downstairs to answer the doorbell while engaged in a passionate activity upstairs. The judge deals with the possession issue in two footnotes:

See for example, United States v. Peter, 178 F. Supp. 854 (E.D. La. 1959) where it is held that under the Louisiana Civil Code and the Code D’Napolean the finder of treasure does not own it, and can only become the owner if no one else can prove that the treasure is his property. Author’s note. Everything I know about Louisiana’s Napoleonic Code, I’ve learned from A Streetcar Named Desire: “It looks to me like you have been swindled, baby, and when you’re swindled under the Napoleonic Code, I’m swindled too. And I don’t like being swindled.”  Stanley Kowalski (Act One, Scene Two)

Strike Three. The judge rejected the Cesarinis’ capital gains argument: They didn’t sell the piano or the “old currency.”

The Appeals court in affirming the District Court stated: “We consider that his opinion…adequately discussed the facts and correctly applied relevant rules of law. We find no need to supplement it.”

Take away. The Cesarinis had to render unto Caesar the things that are Caesar’s. And Hample will have taxable income equal to the ball’s FMV.

Hample, not the Yankees, is deemed to have a $150,000 cash charitable contribution. If he were an itemizer, his gift would be deductible, subject to the adjusted gross income (AGI) ceiling and carryover rules.

If the IRS wishes to play hardball with Hample: The two autographed bats and the sweatshirt weren’t gifts to Hample but part of the payment for his giving the Yankees ownership of the ball. The landmark U.S. Supreme Court case, Commissioner v. Duberstein, 363 U.S. 278 (1960), tells how to differentiate a non-taxable gift from taxable income. It is the transferor’s intent (not the transferee’s) that governs. The question of fact must be determined on a case-by-case basis. A “gift” proceeds from a “detached and disinterested generosity” and is made “out of affection, respect, admiration, charity or like impulses.”

If Hample were to contribute the bats and the sweatshirt to a charity now, it would make no difference that his holding period is short-term and that the gift is for an “unrelated use.” He’d get a deduction for his cost basis (same as current FMV), subject to the AGI ceiling and carryover rules.

If Hample holds the items until they are long-term (held more than one year) and they appreciate above his basis, he could contribute them to a charity (e.g., The Baseball Hall of Fame) for a related use and have a FMV deduction subject to the AGI ceiling and carryover rules.

Assume—only for purpose of discussion—that Hample is a collector of baseball memorabilia. But he also sells some items. If he regularly does so, the IRS will deem him to be a dealer who is selling inventory. His sales proceeds (over his basis) will be ordinary income. And if he holds an item for more than a year and contributes it to charity, his deduction will be limited to basis (or lower FMV) even if the charity uses the item for a related use. Conversely, if he is a collector or investor and not a dealer, a sale after a year will be taxed as a capital gain (not ordinary income). And if he contributes the item for a “related use,” he should have a FMV deduction.

The tax game can be even more fun for an individual who is a dealer for some items and a collector for others. If he contributes from his dealer inventory, his charitable deduction regardless of holding period and the charity’s use is the lower of basis and FMV. But if he contributes from his private collection (not held for sale to customers), his long-term related use gift will be for its FMV. See Wilford, 64 TCM. 422 (1992). This isn’t a charitable contribution case but deals with the issue. It holds that an individual—depending on the facts—can be a dealer for some sales and an investor for others.

The $3.5 million paid to the charities by the Yankees could be considered Rodriguez’s gifts and deductible by him up to the applicable AGI ceiling and carryover rules. Or if not deductible as charitable contributions (because of the AGI ceiling and carryover rules), arguably Rodriguez could deduct the payments as ordinary and necessary business expenses—subject to other rules.

The IRS may not spare the A-Rod. Rodriguez said that he’s giving the historic ball to his daughters. Assuming the ball has a $150,000 FMV, he’s making a gift to them in that amount. The gift to each daughter qualifies for the $14,000 annual-per-donee gift tax exclusion. Above the excludable amounts, Rodriguez will have to dip into his unified gift and estate tax exemption. But if he’s already exhausted the exemption, he’ll have gift taxes to pay.