/sites/all/themes/penton_subtheme_wealthmanagement/images/logos/footer.png
Recent
Recent
Eight Must Reads for the CRE Industry Today (Dec. 7, 2021)
Dec 06, 2021
Ten Steps to Protect Sensitive Information This Holiday Season
Dec 06, 2021
Celebrity Estates: MacKenzie Scott and the Future of Giving
Dec 06, 2021
Corporations Are Bringing Needed Inventory to the Sale-Leaseback Market
Dec 06, 2021
Featured
The 10 Best and 10 Worst States in Which to Retire in 2021
Jul 15, 2021
Poll: 15 Classic Books on Investing and the Markets
Apr 03, 2020
25 U.S. Markets Adding the Most Multifamily Units This Year
Feb 03, 2021
Fifteen Must-Listen Business Podcasts for Advisors
Aug 14, 2020
Bloomberg
brought to you by 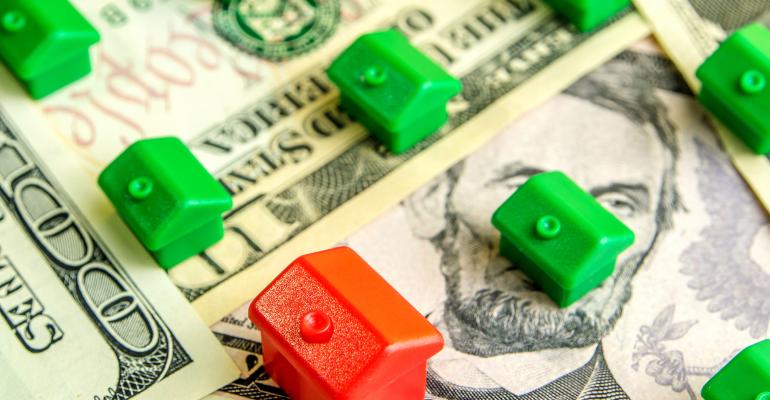 Where the Money Goes: Private Capital Gets It, Hedge Funds Don't

Three-quarters of the way through 2018, money flowing into private funds dedicated to credit, property and other real assets is on track to top last year while hedge funds and actively managed mutual funds are sliding backward.

By Krista Gmelich and Melissa Karsh

Three-quarters of the way through 2018, money flowing into private funds dedicated to credit, property and other real assets is on track to top last year. Meanwhile, hedge funds and actively managed mutual funds broadly are sliding backward even as volatility spikes in markets.

Here’s a look at where investors put their cash in the first nine months of the year:

The sweet spots are real assets, real estate and debt, which attracted more from investors during the first nine months of 2018 than over the same period last year, according to data compiled by Bloomberg. Private debt may be especially appealing due to predictable cash flows, inflation-hedging features and low default rates, according to a Preqin report published earlier this month.

Money for real estate funds has also been easy to come by this year as investors like pensions and insurers seek inflation protection and to expand beyond traditional stock and bond holdings. 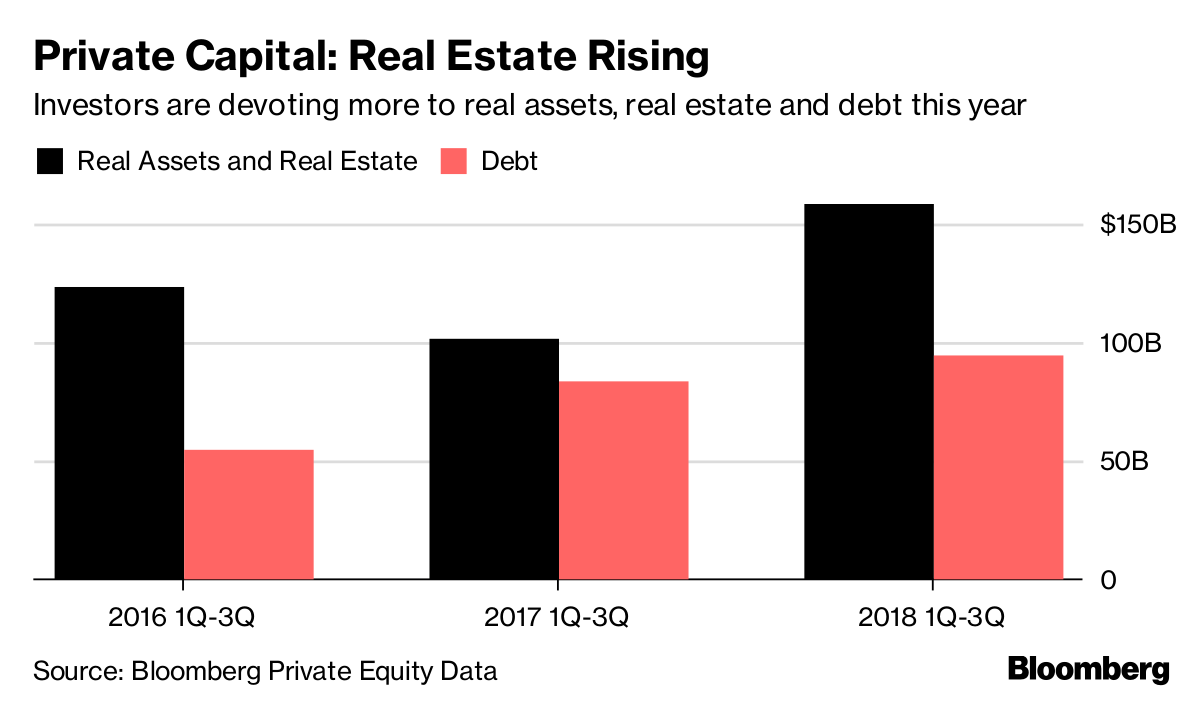 Private equity, which includes traditional buyout funds, is still having a strong year, though it may not touch the $464 billion raised last year. The asset class brought in $306 billion during the first three quarters of 2018, Bloomberg data show.

“The year’s trend is historically healthy, but it’s believed that it won’t reach the full-year 2017 record,” according to a note earlier this month from Bloomberg Intelligence analyst Paul Gulberg.

The outlook is bleaker for hedge funds, which are headed for a year of outflows after $9.8 billion trickled in last year.

Investors yanked $11.1 billion from hedge funds this year through September, according to Hedge Fund Research. The redemptions hit equity and macro funds, which promise to thrive in more volatile markets.

A potential bright spot: Smaller funds recorded inflows. That may be because investors can negotiate better terms and fees with them, according to Don Steinbrugge, managing partner of hedge fund consulting firm Agecroft Partners. Additionally, many investors believe it’s more difficult for larger firms to generate strong returns, he said. 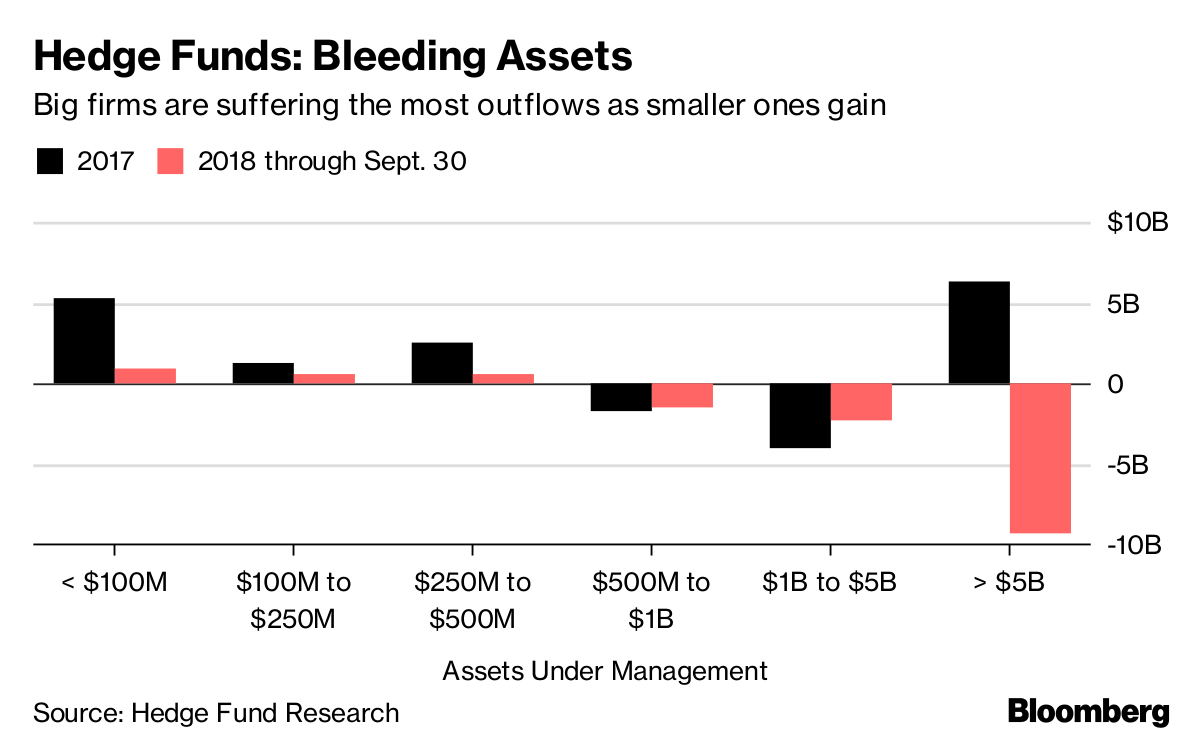 Outflows from actively managed funds were $49 billion in the first three quarters of the year, up seven times from all of 2017, Morningstar data show.

The jump in redemptions comes as flows into taxable bond funds have slowed from last year. Active funds invested in U.S. stocks saw $107 billion in outflows in the year through September -- the most of any strategy -- although less than in all of 2017.

In stark contrast, their passive counterparts sat back and took in money, attracting $330 billion in the same period. However, passive funds are on pace to get less from investors than they did in 2017. 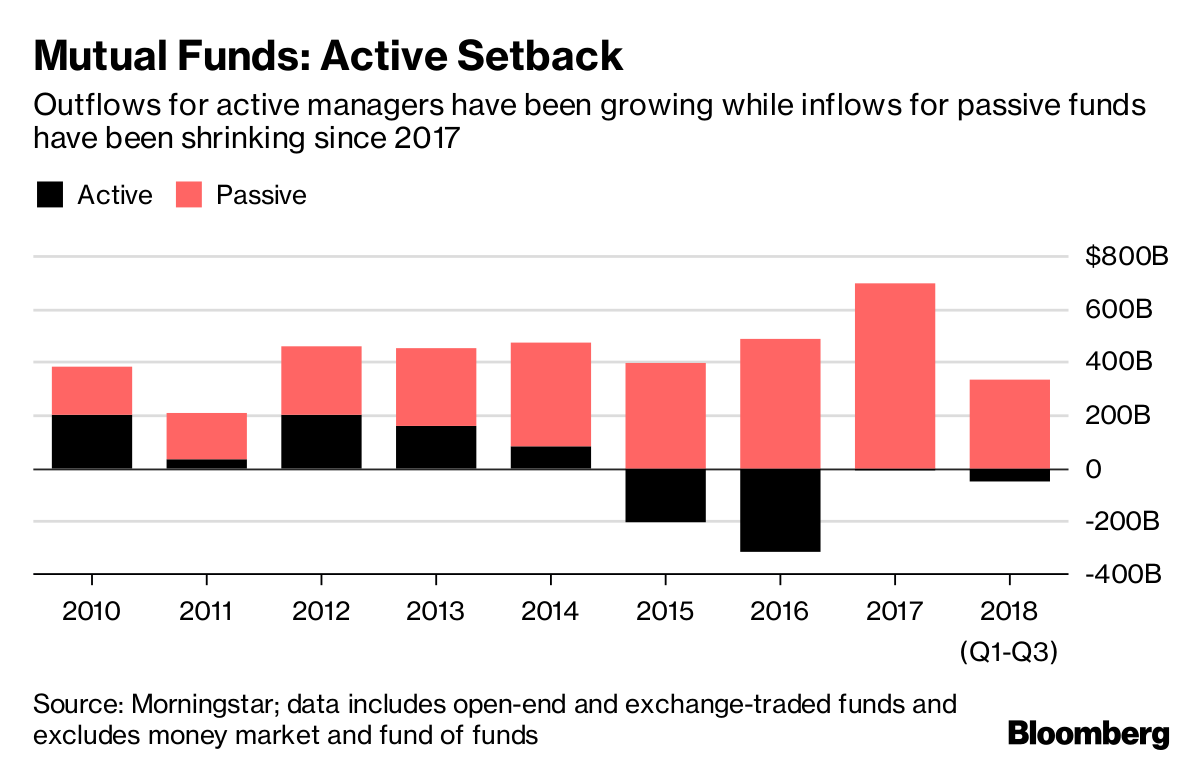