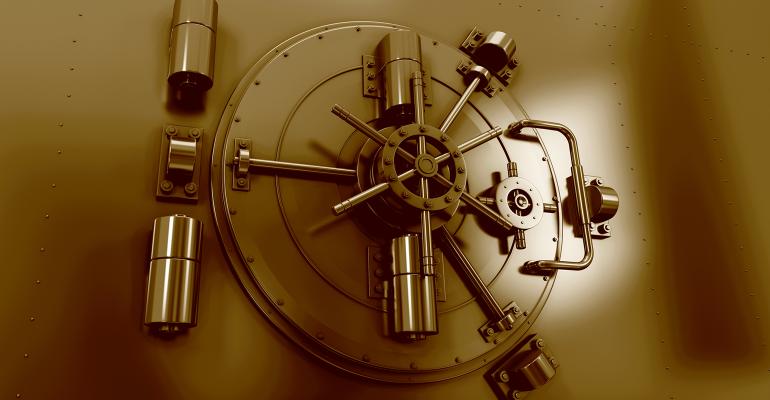 A rush into haven assets that began during the financial crisis is getting a new lease on life from an upsurge in populist politics and a quickening of inflation.

(Bloomberg) --From safety-deposit boxes in leafy west London to high-security facilities housing gold and silver in Frankfurt, companies that store valuables are expanding to meet demand.

A rush into haven assets that began during the financial crisis is getting a new lease on life from an upsurge in populist politics and a quickening of inflation. Two firms say they’re planning to open vaults in Europe capable of holding more than 100 million euros ($112 million) in gold, offering customers lower costs than exchange-traded products and protection from rising prices.

“Inflation is a key concern for many of our clients,” said Ross Norman, chief executive officer of bullion dealer Sharps Pixley Ltd., which operates a gold vault within walking distance of Buckingham Palace. “A safe-haven asset isn’t just about what you buy—it’s also about where you keep it.”

Political surprises like Britain’s decision to leave the European Union and the election of Donald Trump as U.S. president have shaken investors over the past year. At the same time, negative interest rates have persisted across much of Europe and inflation has shown signs of life, threatening to wipe out the fixed coupon payments offered by bonds and increasing the allure of storing wealth in a dark room with walls of tempered steel.

“I was just dealing with a customer here in Germany who got charged negative interest rates on his bank account,” Daniel Marburger, the CEO of CoinInvest.com, said by email from Frankfurt. The client decided to buy gold and silver with some of his cash. “That is definitely a driving factor and will lead to more sales and also more storage clients.”

CoinInvest, a European gold dealer, is in negotiations over the construction of a 100 square-meter (1,076 square-foot) vault that would hold more than 100 million euros of the precious metal. The safe will weigh 82 metric tons, with the door alone tipping the scales at 1.5 tons.

Users of the largest online platform for physical gold trading, BullionVault.com, added about 3 tons of the metal in the 12 months through May, bringing their combined holdings to almost 38 tons—worth $1.5 billion at current prices. The company holds the gold in vaults in Zurich, London, New York, Singapore and Toronto, said Paul Tustain, one of the company’s founders.

Gold in storage at the Bank of England—which operates one of the largest commercial vaults—climbed about 6 percent since the start of 2016 to some 5,067 tons in February. The central bank holds gold for the U.K. Treasury, other central banks and private firms.

“Our customers are looking to park their wealth somewhere,” Tony Dobra, the CEO of Baird & Co., the U.K.’s largest gold refiner, said at a party previewing the opening of a new vault. “They understand fluctuations in the gold price, but they’re comfortable with that. They know gold’s never going to go to zero.”

The vault, set to open soon, has steel walls that look to be about a foot thick and seismometers to detect nearby digging or boring. For security reasons, more than one person is required to open the door.

Baird’s London vault and similar ones in Singapore and Sydney store only metal refined by the company. Customers can buy gold, hold it there, and even sell it back to Baird with same-day payment so long as it’s never left the vault. The firm charges 0.2 percent of the value of the metal annually, excluding any transaction costs, while BullionVault charges 0.12 percent. That compares with fees of 0.4 percent charged by the largest exchange-traded gold fund.

Flows into ETFs backed by the metal are another source of vaulting demand. Investors have been net buyers of gold ETFs in a basket tracked by Bloomberg in four of the past five quarters.

Christopher Barrow, the CEO of Metropolitan Safe Deposits Ltd., said the firm is increasing its capacity “all the time,” as demand has never been greater. “We have very substantial vaults and our St. John’s Wood vault is not too far from full capacity.”

One company seeking to capitalize on this boom is INTL FCStone Inc., which started a platform to allow investors with gold in vaults to trade with one another. Since starting in February, it linked 1,500 locations with more than a hundred customers active in the $170 billion professional gold market. More than 10 tons of gold has traded.

“I’ve been in the gold market 30 years, and suddenly, I’ve got people asking to be on the platform I’ve never even heard of,” said Barry Canham, who heads the company’s precious metals division, in an interview from London. “They’re coming out of the woodwork.”