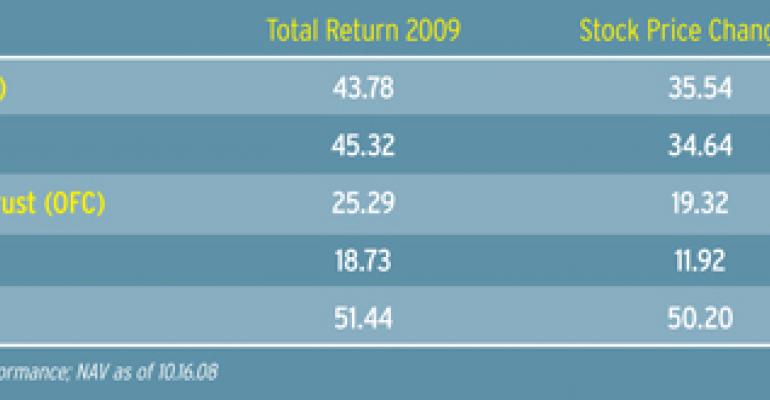 I&#8217;ve been full of optimism when it comes to U.S. real estate investment trusts (REITs) --- and have been since December 2008. People called me crazy, but I was right. Here is my story.

When I see a glass that is half full, I see a glass that is half empty. Yet I’ve been full of optimism when it comes to U.S. real estate investment trusts (REITs). Despite the global credit crisis and a crippling recession, I—a humble journalist covering the real estate beat—see the investment opportunities presented by REITs. In fact, if I may brag, I advised my parents to invest in REITs in late 2008, picking five REIT stocks and sharing them with Registered Rep. readers in the December 2008 issue.

People thought I was crazy. More specifically, most people I talked to thought my recommendations were risky and stupid—or, viewed from another more optimistic angle, a guaranteed tax-loss carryforwards maneuver. The big worry? Investors were concerned that many REITs, with their debt-laden balance sheets and maturing mortgages, were headed toward insolvency. It didn’t help that one of the largest REITs in the country, Chicago-based General Growth Properties, was then teetering on the edge of bankruptcy. (The REIT eventually filed for Chapter 11 in April 2009).

From my perspective during that time, however, REIT stocks were downright cheap (off more than 50 percent from their peak in early 2007), especially given the quality of the underlying assets and the expertise offered by REIT management teams. And now I’m in danger of sounding like an “I-told-you-so,” but consider that through 2009, the FTSE Equity REIT Index was up 121.53 percent. Of course, that’s not the return you got in the real world. I mean, skeptics were correct; it was tough out there and many REITs were forced to slash their dividends, bringing the FTSE Equity REIT index’s total return down to 27.99 percent. Yes, that’s an ugly evisceration of the capital gain. But that total return was still enough to outperform most major market benchmarks in 2009, besting the Dow Jones Industrial Average (18.82 percent), the Russell 2000 (27.17 percent) and squeaking past the S&P 500 (26.46 percent).

REIT performance was fueled, in part, by the recapitalization of the REIT industry. As market volatility subsided and the capital markets began to thaw, REITs raised nearly $38 billion through equity and debt offerings, assuaging fears of insolvency and strengthening their balance sheets. In fact, four out of the five REITs I picked successfully issued equity in 2009.

“REITs’ ability to raise money gave investors confidence that REITs would not only survive, but that they were in a position to take advantage of attractive acquisition opportunities,” says Keven Lindemann, director of the real estate group at SNL Financial in Charlottesville, Va. “There was a belief that although real estate was under pressure, things were not as bad as the stock prices implied. There was a sense that you were buying these REITs for 70 cents on the dollar given their discounts to net asset value.”

While REITs are no longer quite as cheap as they were in early 2009 before the rally, they still have room to appreciate, according to Rich Moore, a REIT analyst with RCB Capital Markets in Cleveland. “There is still a lot of concern about commercial real estate, maybe too much concern,” he says. “The bottom line is that the REIT index will move higher as the economy improves.”

Moore is more optimistic than many analysts, however. Barclay Capital’s REIT analyst team, for example, contends that valuations are materially less attractive than one year ago and downgraded its investment rating of the REIT sector to “2-Neutral” from “1-Positive.” The downgrade reflects the team’s view that the sector is fairly valued given that earnings growth is not likely until 2011and that REITs may appear less attractive than other investments.

That said, REITs have always been important to investors seeking income; REITs are also a good hedge against inflation. The 3.75 percent REIT dividend yield may become increasingly attractive if interest rates remain low. Likewise, REIT earnings would theoretically grow in an inflation scenario, which would also appeal to investors.

“A lot of people who are investing for the long-term are placing bets on REITs,” Lindemann says.

A Look at Interesting Individual REITs

AvalonBay Communities (Ticker: AVB) is an apartment REIT that develops, owns and operates a portfolio of Class A properties in high barrier-to-entry markets such as New York City and Washington D.C. Its portfolio consists of 51,118 units in 180 properties within 14 submarkets.

AvalonBay is considered a bellweather company for the apartment REIT sector. Last year, the REIT achieved a total return of 43.78 percent. Its stock price increased 35.54 percent during that same period, while its dividend yield was 4.35 percent.

Rich Anderson, a REIT analyst with BMO Capital Markets, rates AvalonBay as a market perform for 2010, primarily because of fundamentals such as occupancy and net operating income continue to deteriorate. “You don’t want to abandon AvalonBay if you believe multifamily is a sector to be overweighted in,” he points out.

BioMed Realty Trust (BMR) owns a lab/life science portfolio containing 10.5 million square feet and utilizes long-term leases (minimal near-term expirations) and a triple-net lease structure (which places the burden of the cost of operating and maintaining space on the tenant). The REIT’s portfolio consists of properties located biotechnology nodes such as Cambridge, Mass. and San Francisco.

Anderson says the current pressures in the pharmaceutical industry and the uncertainty created by ObamaCare has generated some worry about the biotechnology sector. However, BioMed has managed to sustain leasing momentum for its properties and to maintain strong occupancies.

Moreover, BioMed’s balance sheet and liquidity have improved markedly, and the company is now in position to make some opportunistic acquisitions, Anderson says. He rates the REIT as “outperform” with a price target of $18. The stock is currently trading at $16.95.

The U.S. government and various other government agencies represent 60 to 65 percent of the REIT’s tenant base, setting Corporate Office Properties apart from other office REITs. For the past several years, the REIT has outperformed both its sector peers and the broader REIT market. However, it is still exposed to the downturn in the general office market.

Moreover, Corporate Office Properties had to deal with a significant amount of secured debt in 2009. As a result, the REIT’s total return was 25.29 percent with a 19.32 percent increase in stock price. Its 2009 dividend was below the sector average at 3.55 percent.

Corporate Office Properties provided a conservative outlook for 2010 guidance, which spooked the market a bit. The lower-than-expected guidance is a function of balance sheet repair, according to Anderson, who expects it to resume top-tier growth. “The question to us is when, not if,” he says. “No stock is going to knock the cover off the ball every year, but OFC is one of these names you can own with a limited amount of anxiety for a long period of time.”

I picked Extra Space because the self-storage sector possesses some recession resistant qualities. But the recession has impacted the REIT more than anticipated, pushing down occupancies and decreasing net operating income.

As a result, Extra Space was my worst performing stock pick, with a total return of 18.73 percent, well below the REIT industry benchmark, according to SNL Financial. The REIT stock price only increased 11.92 percent in 2009, again well below the 22.24 percent increase realized by the entire sector. But, Extra Space’s dividend is the highest of all my picks at 4.50 percent.

Paul Adornato, a REIT analyst with BMO Capital Markets, has rated Extra Space as a “marketperform” in a sector rated as “outperform.”

In light of the existing stock price (at about $13.00, EXR has more than doubled in the past 12 months) and the expectation that occupancy and rents will likely continue to weaken, investors might want to consider trading Extra Space for another REIT investment, according to experts.

Simon Property Group (SPG) is the largest regional mall REIT in the world with more than 370 properties in its portfolio. It own premium outlets centers in addition to malls and is one of 13 REITs in the S&P 500.

Simon, widely considered to be the bellweather of the entire REIT industry, was one of the first REITs to raise equity and debt in 2009. In total, the company raised nearly $2 billion to position itself for future growth, and in December 2009, Simon announced that it would deploy some of that capital by acquiring Prime Outlets in a transaction valued at approximately $2.3 billion. According to management, the purchase represents an initial cap rate of 8 percent.

In 2009, Simon achieved a total return of 51.44 percent with its share price shooting up 50.2 percent. Simon’s dividend was the lowest of all my picks at 0.6 percent, with Simon paying the dividend as a mix of stock and cash. But, RBC Capital’s Moore expects it to increase its dividends as business improves.

Moore contends that Simon is a “no-brainer” investment again for 2010. “Simon has a great balance sheet and great properties, and their acquisitions will be highly accretive,” he notes. “It’s hard to beat Simon. I say keep what you have and buy some more.”
TAGS: Investment Alternative Investments News
0 comments
Hide comments
Related
Sponsored