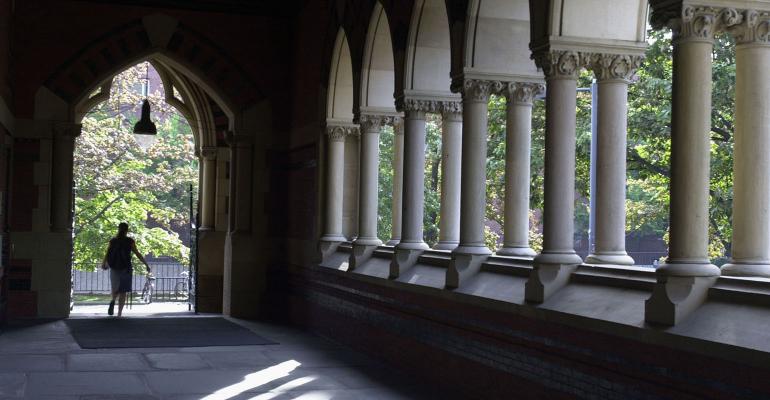 The most glaring laggards among the richest schools in fiscal 2017 include Harvard’s $37.1 billion fund and Ivy League rival Yale, both of which are heavily invested in alternatives.

(Bloomberg) --Harvard, Princeton and Yale universities would have done well to heed the advice of Warren Buffett, who has long advocated investments in low-cost index funds while questioning the value of hedge funds. At least in the last fiscal year.

Endowments with a big slice of their assets exposed to public equities were rewarded by a bull market in the year through June, when the S&P 500 and MSCI All Country World indexes returned 18 percent and 19 percent, respectively. Hedge funds returned just 8 percent on average, according to data compiled by Bloomberg. Venture capital and other difficult-to-price assets also performed worse than stocks.

The most glaring laggards among the richest schools in fiscal 2017 include Harvard’s $37.1 billion fund and Ivy League rival Yale, both of which are heavily invested in alternatives. More than half of Yale’s $27.2 billion fund was targeted for investments including venture capital, hedge funds and leveraged buyouts. Yale had earmarked just 4 percent of its portfolio for public equities. “It wasn’t a market that was conducive to alternative investments,” said Adam Conish, managing director of endowment and foundation investing at Glenmede, which oversees $37 billion. “If you didn’t have a large, concentrated allocation to U.S. and international equities, you didn’t keep pace.”

The average return for more than 450 endowments and foundations was 12.7 percent, according to Cambridge Associates, led so far by Iowa’s tiny Grinnell College, whose $1.8 billion fund returned 18.8 percent. Grinnell said the public equities portion was the biggest driver, with a 25 percent gain. Yale, meanwhile, gained 11.3 percent. Harvard, at 8.1 percent, was among the worst performers nationwide.

Still, over the long term, the biggest funds tend to be the top performers not only because of the strong run in public markets but also because they selected stellar managers, particularly in alternatives.

Yale, led by David Swensen since 1985, has returned 12.1 percent on average for the past 20 years. Princeton, managed by Andy Golden since 1995, has a 10-year average return of 7.1 percent, surpassing the average 4.4 percent gain for endowments calculated by Cambridge Associates.

For some funds with a mix of public and private investments, just about everything worked right. Lehigh University’s $1.3 billion fund, with 45 percent in public equities and 45 percent in hedge funds, private equity and real estate, returned 15 percent.

The University of Rochester, which had greater exposure to alternatives than it did to stocks, gained a better-than-average 14.3 percent for its $2.3 billion fund.

Rochester Chief Investment Officer  Doug Phillips said its 21 percent allocation to public and private investments in emerging markets, particularly Asia, paid off. The asset allocation will be largely unchanged for the current fiscal year, he said in an interview.

Glenmede’s Conish said he’s telling clients to focus on the long term instead of rushing into public equities that look overvalued.

“Now is the worst possible time to move out of alternatives,” he said. “The added benefit of investing in private markets is the higher return potential and improved risk/reward profile. Over the long term, that plays out and you’re rewarded.”