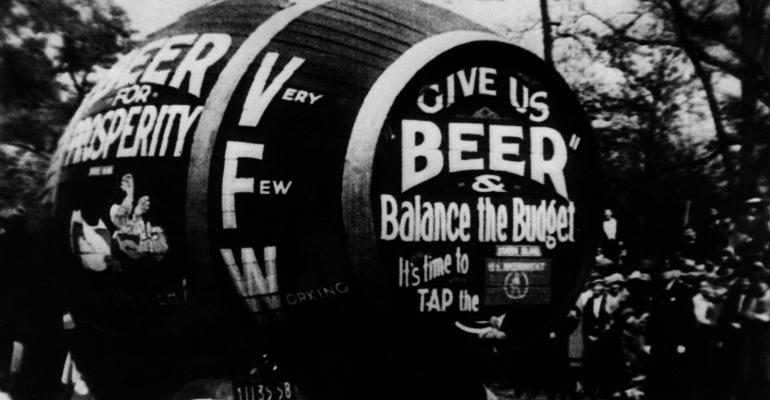 The Investing Parallels of Alcohol and Marijuana

Marijuana is right now where alcohol was just before Prohibition was repealed.

(Bloomberg View) --Imagine for a moment that you could go back in time to 1932, the year before the 21st Amendment to the U.S. Constitution was ratified, repealing Prohibition (and the 18th Amendment). What might you do with the knowledge that the production, transport and sale of alcoholic beverages was about to be legalized? What sort of investment opportunities might you find? How would you deploy your capital?

Fast-forward to 2017. Might we be in a similar, if not exactly parallel, situation regarding a different investment opportunity?

It’s a question I have been thinking about since the announcement that Canada will consider legislation to legalize marijuana for recreational use. According to Bloomberg News:

The proposal would make Canada only the second country in the world to legalize the retail sale and use of pot after Uruguay (medical marijuana is already legal in about 20 countries).

This is potentially a big deal: Legal marijuana was a $3.4 billion business in 2015 in the U.S.; Arc View Market Research pegged the legal marijuana market in 2016 at $7.1 billion. That is expected to triple during the next three years to $22 billion.

It’s not too surprising that with that kind of growth, marijuana is attracting a lot of attention and potential investment dollars.

In an email exchange, Todd Harrison, managing partner at CB1 Capital LLC, a hedge fund that focuses on biomedical applications, wrote that “cannabis is already the fasting growing industry in the world despite the stateside illegality, making it a rare ‘outside-in’ global phenomenon.” He describes an “emerging secular bull market” that covers “disease treatments, wellness supplements, anti-aging creams, sleep remedies, pet food, education, nutraceuticals all while alleviating the societal dependence on opioids.”

Harrison’s fund, once it opens in July, plans to invest in publicly traded stocks. For private companies, there are numerous venture capital firms that are investing in marijuana-related startups. Note that this isn’t limited to small fringe companies: Microsoft Corp. has begun offering cloud-based software that tracks marijuana plants from "seed to sale.”

In the U.S., the legalization movement began when Oregon decriminalized cannabis in 1973. It picked up momentum when California passed a medical marijuana initiative in 1996. Since then, more than half of the states -- 28 plus the District of Columbia -- have amended their laws that had classified marijuana as an illegal drug.

As noted above, the comparison with alcohol is imperfect. Marijuana businesses face obstacles with using the banking system that brewers and spirits distributors never had. Federal rules against money laundering make it difficult for legal weed shops to make large cash deposits at banks.

There are other risks and complicating factors. President Donald Trump and Attorney General Jeff Sessions both have said they oppose the move toward state legalization, which advanced when the Obama administration decided not to strictly enforce federal prohibitions. Also consider what might happen if Canada adopts broad national legalization. The U.S.-Canadian border is the longest international border in the world. Would the Trump administration really devote extra resources to patrolling another, even bigger U.S. border, this time to the north?

Time and momentum probably are on the side of those pressing for legalization, even without the support of the current White House. The Food and Drug Administration is reviewing more medicinal usages, as are other countries. As more countries and states move forward, the end of marijuana prohibition is looking ever more likely.

Famed investor Bill Miller observes that investors who seek to beat the market need a substantial “active share” -- the amount by which their investment holdings differ from their benchmark. Marijuana stocks are not in most major indexes, and they might provide just that sort of difference.

Things are likely to get interesting very soon.

He blogs at the Big Picture and is the author of “Bailout Nation: How Greed and Easy Money Corrupted Wall Street and Shook the World Economy.”