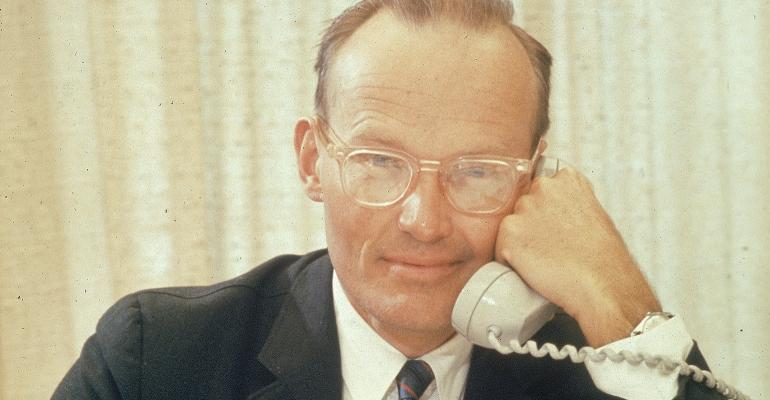 This week, Harvard is moping about its 8 percent investment return. Blame McGeorge Bundy.

(Bloomberg View) — Let us weep tears of sympathy for Harvard University. On Tuesday, the nation’s oldest—and arguably the most distinguished—institution of higher learning announced that its vast $37.1 billion endowment had earned a paltry 8.1 percent return over the past fiscal year. Harvard glumly described the results as “disappointing and not where it needs to be.”

Most fund managers would probably spin these results as a modest success. But Harvard’s endowment isn’t your normal investment vehicle. And it’s hardly alone: Many elite universities and foundations post double-digit returns year after year, making them the envy of Wall Street.

So how did “nonprofits” become so profitable? The standard answer is that star managers like Yale’s David Swensen are responsible. But the real story comes considerably earlier, when universities and foundations first adopted a more aggressive stance toward building wealth, overturning centuries of tradition.

To put things in perspective, consider the state of elite endowments in the 19th century. Though hard figures are hard to obtain, Harvard’s war chest didn’t crack a million dollars until midcentury, and even as late as the 1870s, it was still stuck at around $2.5 million. The painfully slow growth of the endowment was a reflection, in part, of Harvard’s desire to shield its capital from even the smallest hint of risk.

Some measure of this conservative attitude can be gleaned from a famous court case decided in 1830. The will of a wealthy merchant stipulated that his fortune be managed by a group of trustees while his wife was still alive. On her death, the money would pass to the university. When it received the bequest, Harvard discovered that the estate had declined in value, despite being invested in the stocks of reputable banks, insurers and manufacturers.

Harvard sued, alleging that the trustees had failed to protect the bequest. In Harvard College v. Amory (1830), the state Supreme Court ruled against Harvard, declaring that no investment was entirely safe. “Do what you will,” the judge wrote, “the capital is at hazard.” The judge then articulated what became known as the “prudent man rule”: Trustees working on behalf of institutions like Harvard should manage investments the same way that “men of prudence, discretion and intelligence manage their own affairs.” The trustees, the court concluded, had met this definition.

Harvard may have lost the case, but its deeply conservative approach to investing eventually carried the day. Over the next century, court cases and statutory definitions began to circumscribe what the trustees of eleemosynary institutions would reasonably do with the funds under their care. In 1869, for example, the New York Court of Appeals ruled that any investment in common stock was, by definition, imprudent. The “prudent man” had become cautious indeed.

The ban may have been extreme, but it was hardly unusual. As universities began the process of building their endowments, they eschewed double-digit returns in favor of slow and steady growth that could yield a predictable income stream used to cover operating expenses. Interest-bearing savings accounts, government bonds, and other conservative investments remained the bread and butter of most endowment managers. This approach remained the norm well into the 1960s. And then something changed.

Much of the credit goes to McGeorge Bundy, who served as national security advisor to presidents John F. Kennedy and Lyndon B. Johnson before taking over the Ford Foundation in 1966. The following year, he declared war on the conservative management of university endowments. “It is far from clear that trustees have reason to be proud of their performance in making money for their colleges,” he declared. “We recognize the risks of unconventional investing, but the true test of performance in the handling of money is the record of achievement, not the opinion of the respectable.”

The second report, published in 1969, argued that universities and colleges should aggressively pursue risk in the quest to increase their endowments. Its principal author, John Barker, an academic and member of Smith College’s Investment Committee, compiled data on the performance of 15 elite university and college endowments and found them lacking. It predicted that a continuation of outmoded investing strategies would have “highly adverse consequences for long-term endowment values.”

The influence of these two reports—and subsequent studies commissioned by the Ford Foundation—cannot be underestimated. As one account of this critical phase in investment history has observed, the reports launched a revolution in how universities managed their endowments, ushering in a new “focus on total return rather than capital preservation.”

Thanks to the arguments compiled in these reports—and a good deal of lobbying by the Ford Foundation—Congress passed the Uniform Management of Institutional Funds Act in 1972. This legislation took the recommendations of the reports by Cary, Bright and Barker, sending the “prudent man” into early retirement.

A summary of the legislation noted that trustees could finally invest in “growth stocks paying low or no dividends but having a high potential for appreciation in long-term value, rather than concentrate entirely on investments with immediate high-income yield.” Other high-risk, illiquid investments also became fair game in the coming years.

The legislation generated a sea change in institutional investing. Harvard set up the now famous Harvard Management Company in 1974; other elite universities followed suit. Many smaller schools pooled their resources with an investment trust known as the Common Fund. The Ford Foundation actually set it up on their behalf.

Though the financial crisis of 2008 temporarily dampened enthusiasm for high-stakes endowment management, expectations of never-ending, double-digit returns are considered normal for most elite universities, and even many nonprofits.

While this remarkable shift owes a great deal to some shrewd asset managers, the deeper story is no less interesting. Fifty years ago this year, a handful of academics launched a remarkably successful, but largely forgotten, campaign to transform investment norms. As Harvard’s very public—and slightly preposterous—self-flagellation confirms, their efforts have succeeded beyond all expectations.

Stephen Mihm, an associate professor of history at the University of Georgia, is a contributor to Bloomberg View.