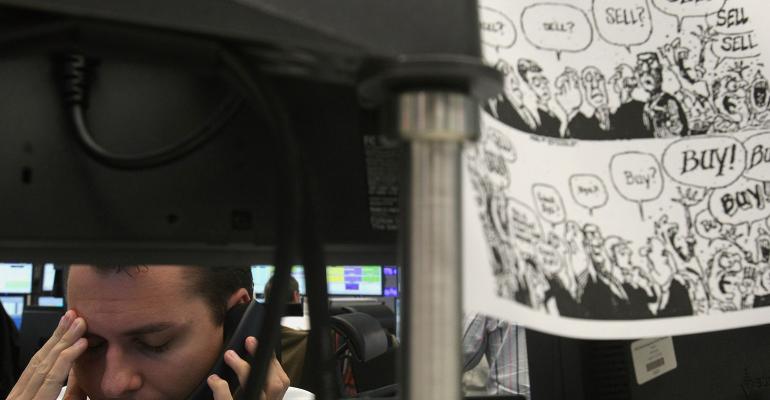 Flash-Crash Trader Jumps Into Currency Market When Others Flee

Isaac Lierberman's Aston Capital Management, built with the help of ex-Army quants, thrives on shocks to the markets.

There’s nothing nefarious afoot here, to be clear. It’s just that at a time when many currency-trading firms don’t know what to do when extreme price fluctuations hit, Lieberman’s brought together a bunch of military and tech gurus to form a firm -- Aston Capital Management -- that’s designed to thrive at those moments. When others shut down, it gears up.

“We get very excited about flash events because it gives us data to work with that’s very hard to come by,” Lieberman said in an interview at Aston’s office on the 85th floor of New York’s Freedom Tower. “You can’t simulate things like this.”

Violent shifts in the $5.1-trillion-a-day foreign-exchange market have become more common in recent years. New players such as Aston, which began in 2014, have emerged as electronic market makers. They offer to buy and sell currencies to customers even during the hairiest price swings and hope to profit when prices bounce back. Aston’s techies analyze price patterns and create computerized strategies to predict where markets will move. They also measure the company’s performance during the events and adapt its algorithms.

“A flash crash or an event could be an opportunity for a currency manager” who specializes in volatility, said Alison Romano, senior investment officer at Florida’s State Board of Administration, which manages the state pension plan. “I want my managers to be taking advantage of that.”

Aston and firms including XTX Markets, Citadel Securities and Virtu Financial are stepping into a gap left by traditional dealers. Stricter regulation enacted since the 2008 financial crisis has prompted some banks to withdraw from the market and cut staff. That’s created a vacuum which makes it more difficult for customers to trade when they want to, at the prices they want to.

Newcomers have also disrupted other assets. Citadel Securities, Virtu, Global Trading Systems and IMC Financial Markets have shaken up how stocks are bought and sold in the U.S., overseeing almost all trading on the floor of the New York Stock Exchange now. And in bonds, JPMorgan Chase & Co. last year agreed to outsource some of its Treasuries business to Virtu.

The new era of turbulence began in 2015 when the Swiss National Bank jolted foreign-exchange markets by abandoning its cap on the franc, triggering a rally of about 41 percent in 20 minutes.

Most recently, the euro surged 1.6 percent over several minutes during Asian trading in December. Before that, in October, the pound slumped about 9 percent in a matter of seconds, prompting a review by the world’s biggest central banks. The South African rand and New Zealand dollar also took similar roller-coaster rides. Lieberman said Aston traded $500 million in 90 seconds during the pound’s plunge.

Traders can get wiped out if they take the wrong side of a price move. Lieberman’s challenge, when he started the firm with his own money after leaving JPMorgan Chase, was to put together a team willing to risk their shirts. Frustrated by competition for engineers and mathematicians in New York, Lieberman said he found a tech whiz through his East Side synagogue. With the help of Roi Klein, an ex-army major from the elite 8200 intelligence unit of the Israel Defense Forces, he recruited a team in Tel Aviv.

Some of Lieberman’s employees had military or tech experience, but scant knowledge of financial markets. So he said he got a white board and started drawing. One of his first examples was a grid of numbers, or an order book, listing bids and offers that traders use as a sort of shopping list. From there, the company created software to make money when big shocks hit the market.

During a flash crash, “what we like to understand is when it hits the wall, which is the hardest to find, but the most opportune to trade into,” Lieberman said in his three-man office with a view of the Statue of Liberty. “At a certain point, it simply stops and prices start to go back to fair value.”

While many of the ex-army quants who helped build Aston have since moved on, the systems they built are still working. The firm handles an average of $1 billion to $2 billion dollars a day -- they’re not just a flash-crash shop, of course -- and it returned more than 22 percent last year through November, according to a company performance report.

Foreign-exchange trading volumes are shrinking, and prices are swinging more wildly, according to a December report by the Bank for International Settlements. Unexpected events such as the pound’s flash crash will probably happen again and it’s hard to predict where and when, said Chris Salmon, executive director for markets at the Bank of England.

For many in the market, flash events are a time to play it safe. Dori Levanoni, a partner at First Quadrant, a Pasadena-based hedge fund that manages about $12.6 billion in currency strategies, said that portfolio managers and traders can hit the pause button and wait for better market conditions before placing orders.

This is Lieberman’s cue to spring into action.

“We try to put together a collage, a story of what happened,” he said, “so we can understand it.”