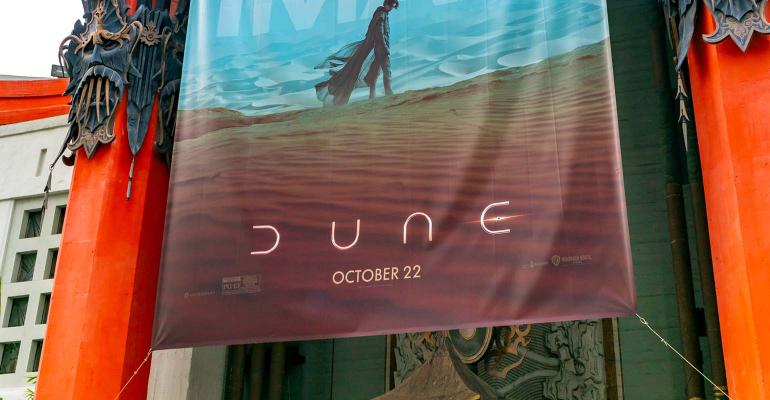 Dune Is the Sci-Fi Epic Commodities Traders Have Always Wanted

(Bloomberg) -- The ribald rivalries that define the business world have long served as fodder for prestige television dramas such as Billions and Succession. But director Denis Villeneuve’s new science fiction film Dune, out on Oct. 22 in the U.S., takes inspiration from an unlikely, unsexy corner of capitalism: commodities trading. By spinning a complex tale about family, revenge, and destiny, it has the drag-on effect of making markets compelling and approachable to a slightly wider audience than usual.

Set in the far, far future—the year 10,191, to be exact—in a galaxy not at all far away, Dune is a fairly faithful adaptation of roughly the first half of author Frank Herbert’s genre-defying 1965 novel. There are no talking aliens here, but plenty of palace intrigue. Mild spoilers follow.

Paul Atreides (Timothée Chalamet) is the sole heir of a noble family that commands increasing influence over the byzantine aristocracy that rules humanity under the Emperor Shaddam IV. The popularity of Paul’s father, Duke Leto (Oscar Isaac), causes the emperor to hatch a plot against the Atreides, a scheme that puts them in control of the desert planet Arrakis (also known as Dune, hence the title). Their stewardship of the planet makes them responsible for harvesting and distributing a substance called “spice,” which is essential for space travel and offers various health benefits.

That’s the pitch: William Shakespeare by way of Andrew Ross Sorkin, with a healthy splash of visual spectacle thrown in. In a lot of ways, the film’s scope is titanic, both in terms of the scale of the story it’s looking to tell and in the amount of stimulus it bombards viewers with. (Watching in IMAX will be intense.) Endless desert, monsters that seem to stretch for miles, theater-shaking explosions, and modulated voice-overs that can bend someone else’s will: It’s all here.

At its heart is the spice—the reason Arrakis is so valuable, the (nominal) reason the Atreides are sent there, and the reason the house’s bitter rivals, the Harkonnens, are so keen to wrest the planet back from them. It’s here that the eyes of any commodities traders in the audience will light up as they realize, for what seems like the first time, there’s a blockbuster tailored to their exact interests. (Or at least to what they get up to during the workday, minus the dust.)

The idea of a substance that’s absolutely invaluable to travel and economic activity has some obvious real-world parallels. While the book predates the Arab oil embargo of the 1970s, it in some ways predicts it, and the wind-swept desert and Arabic terms and phrases sprinkled throughout the film point to clear parallels between the fictitious Arrakis and petro-states in the Middle East.

There are some more apt metaphors in the modern day. The pandemic has snarled global supply chains, creating a shortage of semiconductors now essential to technology in everything from computers to washing machines, including cars and trucks—which doesn’t exactly match “giant ships capable of traveling through space” but serves as the closest real-world analogue.

That spice can be found on only one planet and getting it is so dangerous and difficult (thanks, sandworms) mean any hiccups in production make existing spice stores even more valuable, something the Harkonnens seem keen to cash in on near the end of the film. If the amount of money Amazon.com’s Jeff Bezos has made during the pandemic springs to mind, well, that’s just a sign of the times. And all this without even considering the preciousness of water on this (and our) planet.

Dune invites comparisons to real-world events, with the film opening on Fremen attacking spice harvesters and a voice-over from Chani (Zendaya) describing the cruelty inflicted on her people by out-worlders coming to her planet to claim its riches. The sequence is reminiscent of Native American opposition to the Dakota Access Pipeline and interactions between miners in Brazil and Indigenous groups. On an even larger scale, a dispute between Iraq and Kuwait over oil and energy production partially led to the Gulf War.

The film spends a lot less time addressing the fact that its setting and premise are steeped in Orientalism and white savior tropes, which are likely to be even more front and center if the inevitable but yet-to-be-greenlighted sequel hews closely to the events of the novel. The source material indeed shows its age: Depictions of religious fanaticism seem heavy-handed at best and misguided at worst, and in this current climate of reckoning over representation in art and culture, not updating the text seems like a major misstep.

Which begs a fundamental question: “Is an economic dispute enough to hang a two-and-a-half-hour-long drama on?”

It’s a great question, and a fair one. And while not every element manages to come together perfectly, the framing does provide a solid bedrock for the action playing out on screen, as well as an opportunity to reflect on the economic systems that shape our world. If greed is intrinsic to capitalism and inevitably leads to conflict and inequality, that, and sandworms, should be avoided at all costs.

To contact the author of this story:
Max Reyes in New York at mreyes125@bloomberg.net