/sites/all/themes/penton_subtheme_wealthmanagement/images/logos/footer.png
Recent
Recent
Automation vs. Human Advice: Which Will Win Out?
Dec 06, 2022
Eight Must Reads for the CRE Industry Today (Dec. 7, 2022)
Dec 06, 2022
LA Approves Tax Increase on Real Estate Deals Over $5 Million
Dec 06, 2022
Major Office Distress Is All the Talk. But So Far, it’s Not the Reality.
Dec 06, 2022
Featured
The 10 Best and 10 Worst States in Which to Retire in 2021
Jul 15, 2021
I’m an Advisor. This Book Changed My Life
Aug 31, 2022
Fifteen Must-Listen Business Podcasts for Advisors
Aug 14, 2020
Celebrity Estates: Jay Leno and Planning for Classic Car Collections
Feb 22, 2022
Advisor Confidence Index (ACI)
brought to you by 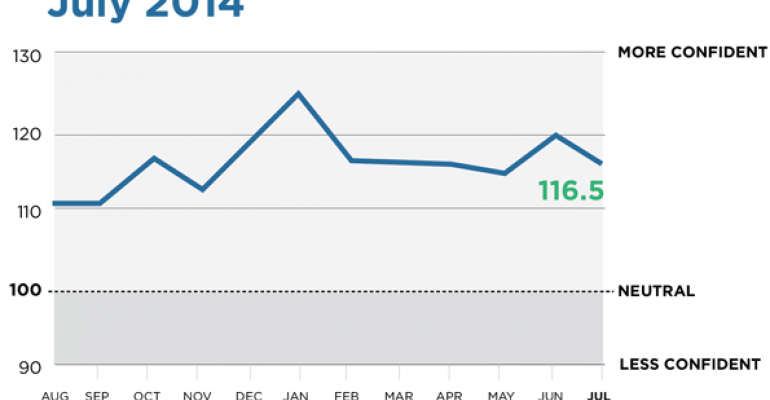 Financial Advisors’ confidence in the economy and the stock markets dipped almost three percent in July, according to Wealthmanagement.com’s Advisor Confidence Index (ACI). That reversed a short-lived boost in optimism last month and brought the sentiment back near its lowest point of the year.

Wealthmanagement.com’s ACI is monthly survey of some 150 financial advisors, asking them to rate their level of optimism on the economy and the near-term future of the stock market. For July, the indicator ended the month at 116.5, a 2.9 percent drop from the previous month. Wealthmanagement.com’s Advisor Confidence Index is sponsored by First Clearing.

Many of the advisors polled said they were nervous growth in the stock market was outpacing the economy. Several mentioned the phasing out of the Federal Reserve’s bond buying program, slated to end completely in October, as having a significant effect on the markets, though there was little consensus on how so.

"In the second half of 2014, market opinion on Fed tapering will move from ‘have fear’ to ‘all clear.’ Be fully invested in equities," said Jonathan Foster, the president and CEO of Angeles Wealth Management in Los Angeles.

“I believe that the ending of the QE program by the Fed could cause the market correction we have all been waiting for,” said Edward J. Kohlhepp, Sr. of Kohlhepp Investment Advisors in Doylestown, PA.

Advisor optimism fell the most when asked about the economy over the next six months. That component of the survey fell 3.5 percent.

“I am less bullish today than I was at the beginning of the year. While there are positive signs such as the Federal Reserve stopping the bond buying program in October, there are negative signs like the re-adjusted negative 2.9 percent GDP growth in the first quarter,” said Ted Sarenski of Blue Ocean Strategic Capital.

Others said the economy wasn’t the problem but rather overstretched valuations in the equity markets that are set to snap back.

“A correction is overdue, even as the economy improves,” said David Ware of Barrington Capital Management in Chicago.

Many blamed the easy money policies of the Federal Reserve as having a negative effect on both the economy and the markets.

“The Feds seem more intent on extracting a pound of flesh from business than advancing any pro business agenda that might restore growth in household income. We're stuck with a populist agenda rather than pro growth policy,” said Robert Higgins, an advisor with Dalton Financial in Eatontown, N.J.

But while optimism has dropped, there is little consensus among advisors on the direction of the markets.

“Can equities continue to reach new highs, almost daily, without a correction during the next six months? We'll only know that when we look in the rear-view mirror,” said Mitchell Freedman of MFAC Financial Advisors in Westlake Village, CA.